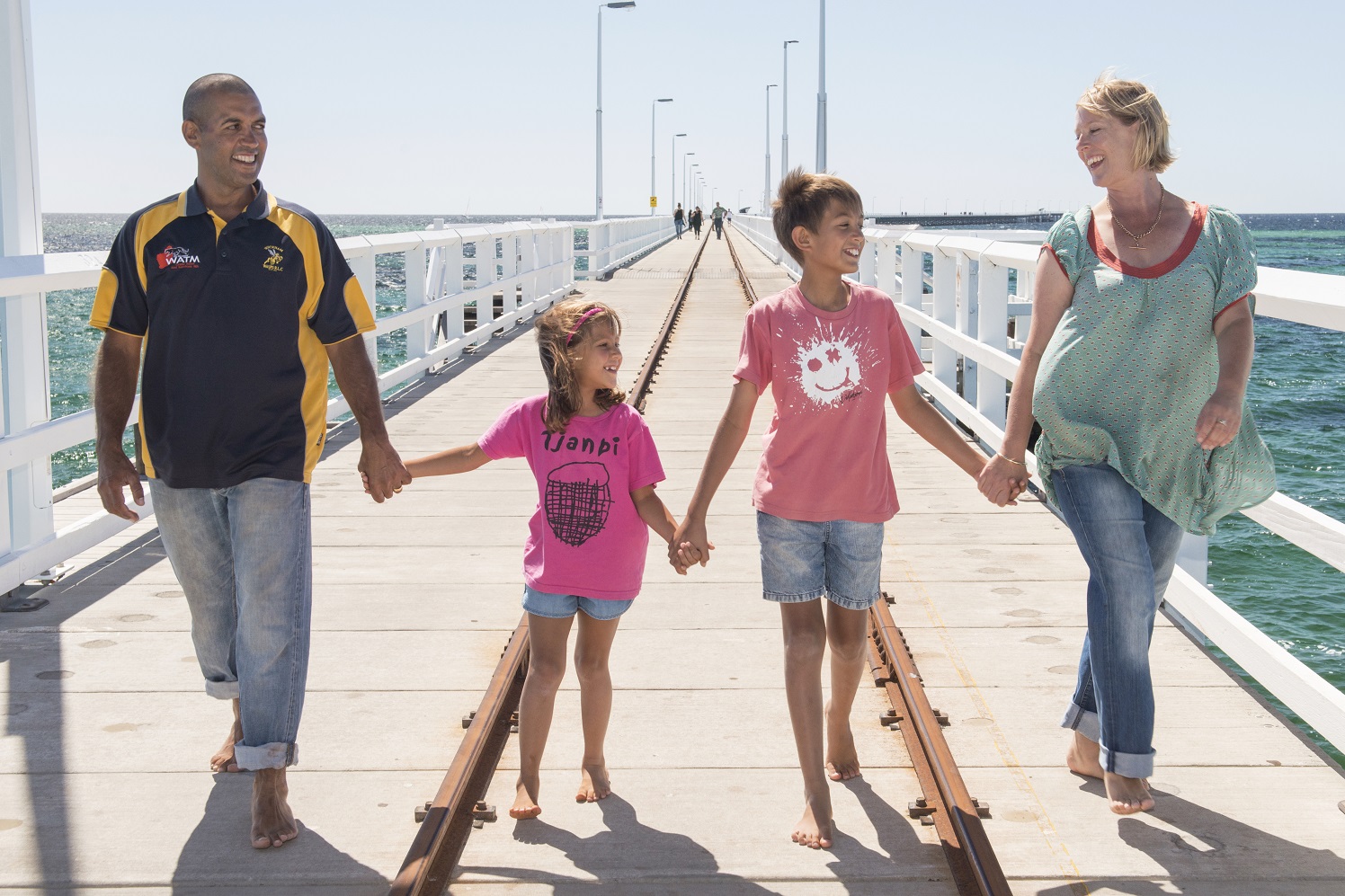 Unlike most working dads, Kelly Smith can often be found volunteering in the primary school classrooms of his two children on his days off.

“The teacher will say: ‘You can look after the arts and craft table over there today’,’’ Kelly says.

“They’ll be doing things with noodles and string.

“I’ll say to the teacher: ‘So, basically you want me to make bracelets and necklaces? Yeah, I can do that. Put me over there.’’’

The fixed plant mechanical maintainer with Rio Tinto has been able to strike a balance between work and home because he’s part of the mining giant’s fly-in fly-out (FIFO) workforce.

Kelly, 43, concedes that while the lifestyle doesn’t suit everyone, it works for him and thousands of others.

His roster of eight days on and six days off means he can devote his time at home to wife Simone, 45, and children Finnley, who is 11 and in grade six, and seven-year-old Harper who is in grade two. Their four-year-old border collie cross, Roxy, is never far from the action.

“As a south- west hub, Busselton is linking the expanding population of the South West with employment opportunities in the Pilbara and enabling our employees and their families to live in the region and contribute to its vitality.’’ Rio Tinto’s Managing Director Australia Joanne Farrell

The family has the added advantage of living in Busselton, where they’ve been for almost the past four years. It’s a regional city built and thriving on a backbone of mining, but not a residential-style mining town which means it is easier to switch off from work.

Kelly works at Rio’s Greater Brockman operations. In about 10 minutes he’s out his front door in Busselton and at the airport. A direct flight of just under two hours lands him at work. 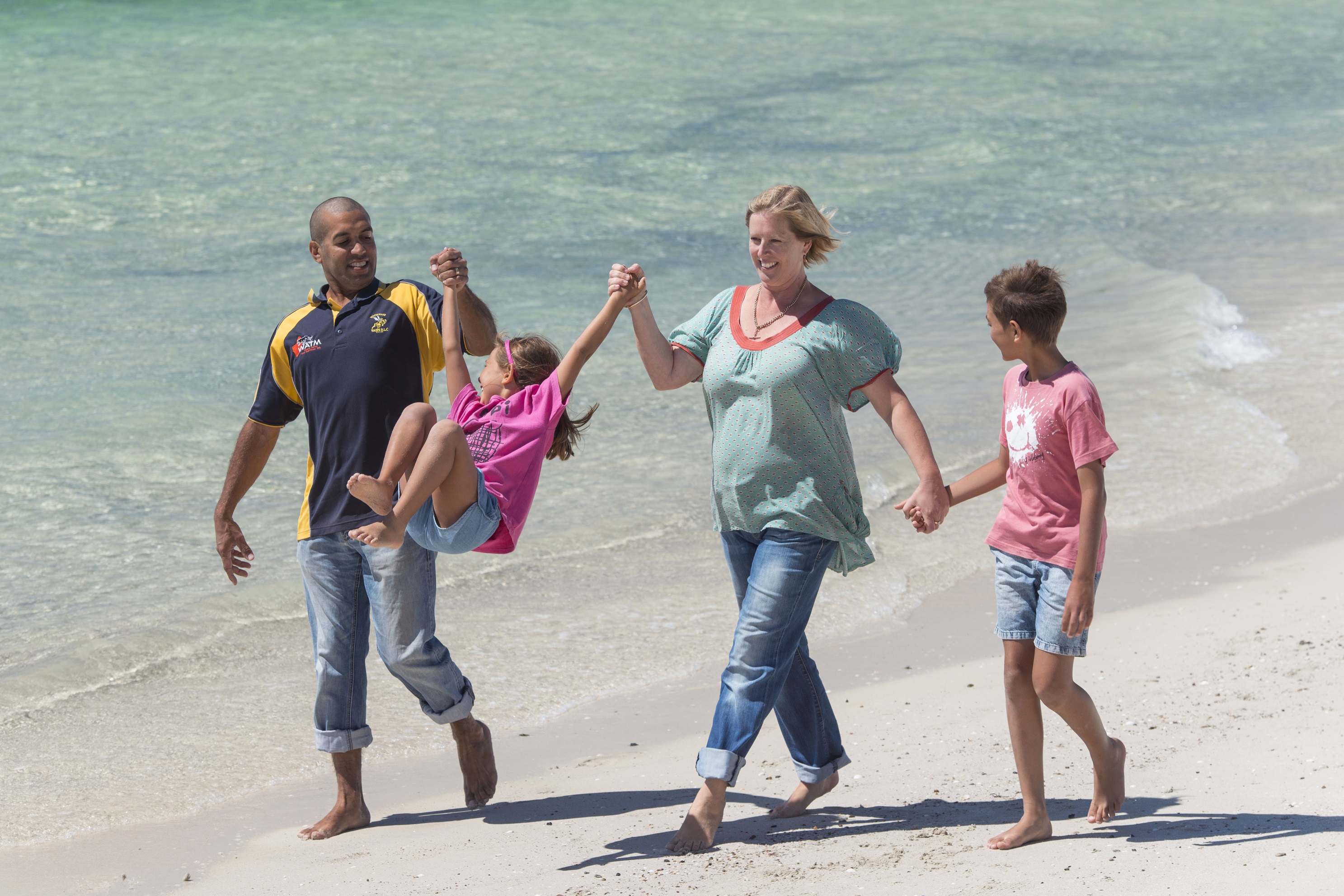 “You fly up on a Wednesday morning and come back the following Wednesday morning,’’ Kelly says. “So, as we're waiting at the airport the guys that have flown up there have already landed and gone to camp.

“It’s the ideal roster for us and many other families.’’

Rio Tinto’s Managing Director Australia Joanne Farrell says the mining giant pioneered the use of regional FIFO in 2006, initiating the first commute from Geraldton with 26 employees.

It later expanded to include Busselton and Broome – which celebrated a decade of regional FIFO last year – then followed by Carnarvon, Exmouth, Derby, , Meekatharra and Albany.

“Today there are over 2000 employees commuting directly from regional Western Australia to Rio’s Pilbara operations, supporting the business to maintain a skilled workforce,’’ Ms Farrell says.

Regional FIFO offers employees a lifestyle choice, allowing them to remain in their home communities and still have a career in mining.

“Regional FIFO has been embraced by these source towns, offering a diversity in employment while assisting to spread the benefits of mining throughout rural and remote Western Australia,’’ she adds.

“Our Busselton workforce supports six of our inland Pilbara mines, drawing from an employment pool that extends throughout the South West from Australind, Boyup Brook, Manjimup and Augusta back to Busselton.’’ 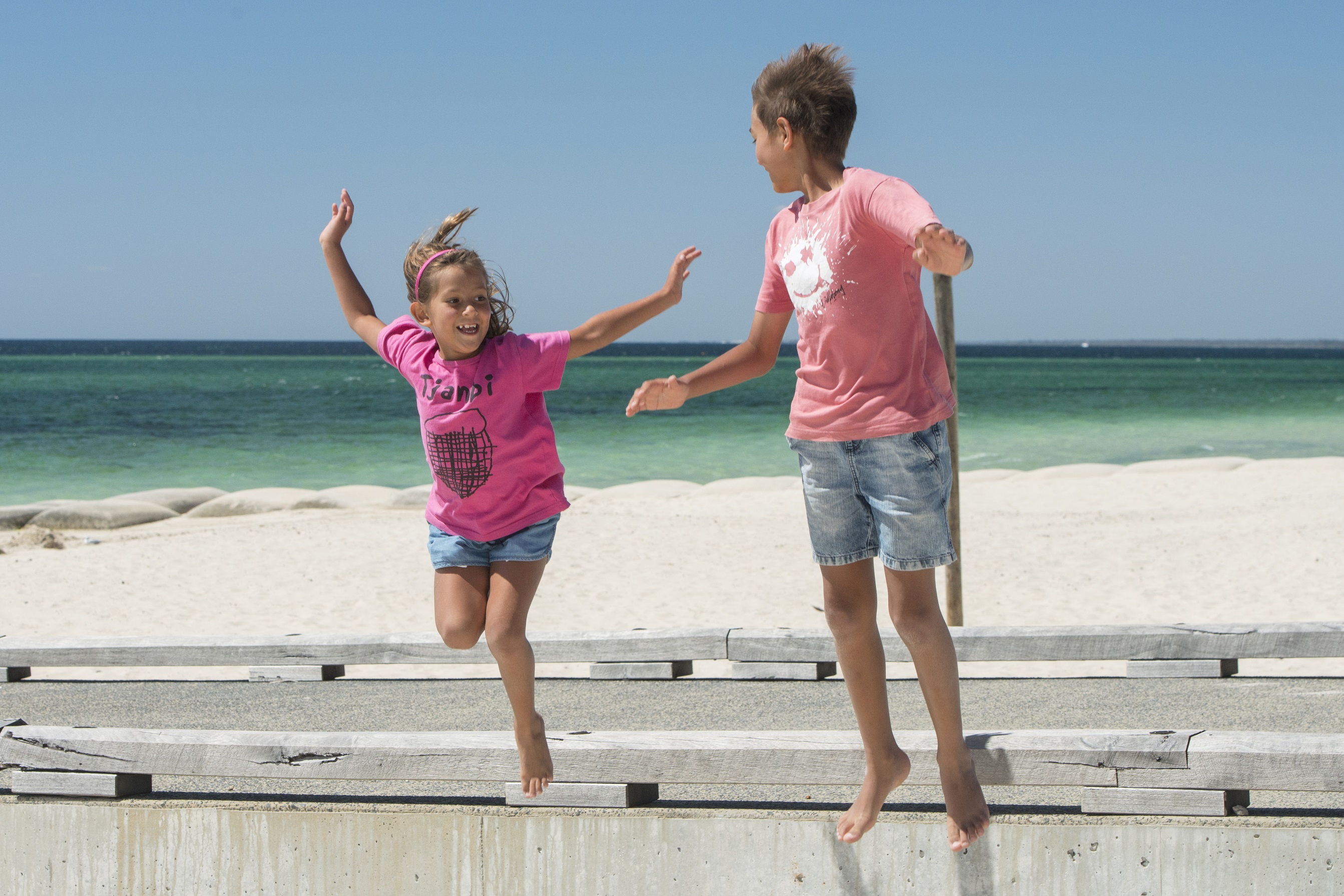 Ms Farrell says: “As a south- west hub, Busselton is linking the expanding population of the South West with employment opportunities in the Pilbara and enabling our employees and their families to live in the region and contribute to its vitality.’’

Kelly and his family, like most in Busselton, shop locally and find there’s almost everything they need in town. Kmart is moving in and they’ve just got an Aldi. There’s no shortage of investment.

Councillor Grant Henley, the Mayor of the City of Busselton, says Rio’s FIFO workforce has transformed his community.

“We've seen quite a shift in the demographic of people who are relocating to this region over the last 10 or so years,’’ Councillor Henley says.

“A lot of that is driven by the opportunities to FIFO directly out of this area. We have, I think, 550 workers a week now who travel out of our airport to the various mine sites without having to do that round trip. But their families live in our growing suburbs, and their kids go to our expanding schools.’’

Before Rio Tinto based one of its regional FIFO hubs in Busselton, it was a coastal retirement community. Now, there is an influx of young people adding to the vibrancy of the city.

“We see especially a lot of young FIFO families have been setting up in Busselton and Dunsborough who have that choice that FIFO offers them,’’ Councillor Henley says.

Kelly and his family have put down roots in Busselton, investing in a house, attracted by the lifestyle and good schools. Most of the local community are supportive of the Rio FIFO workers. 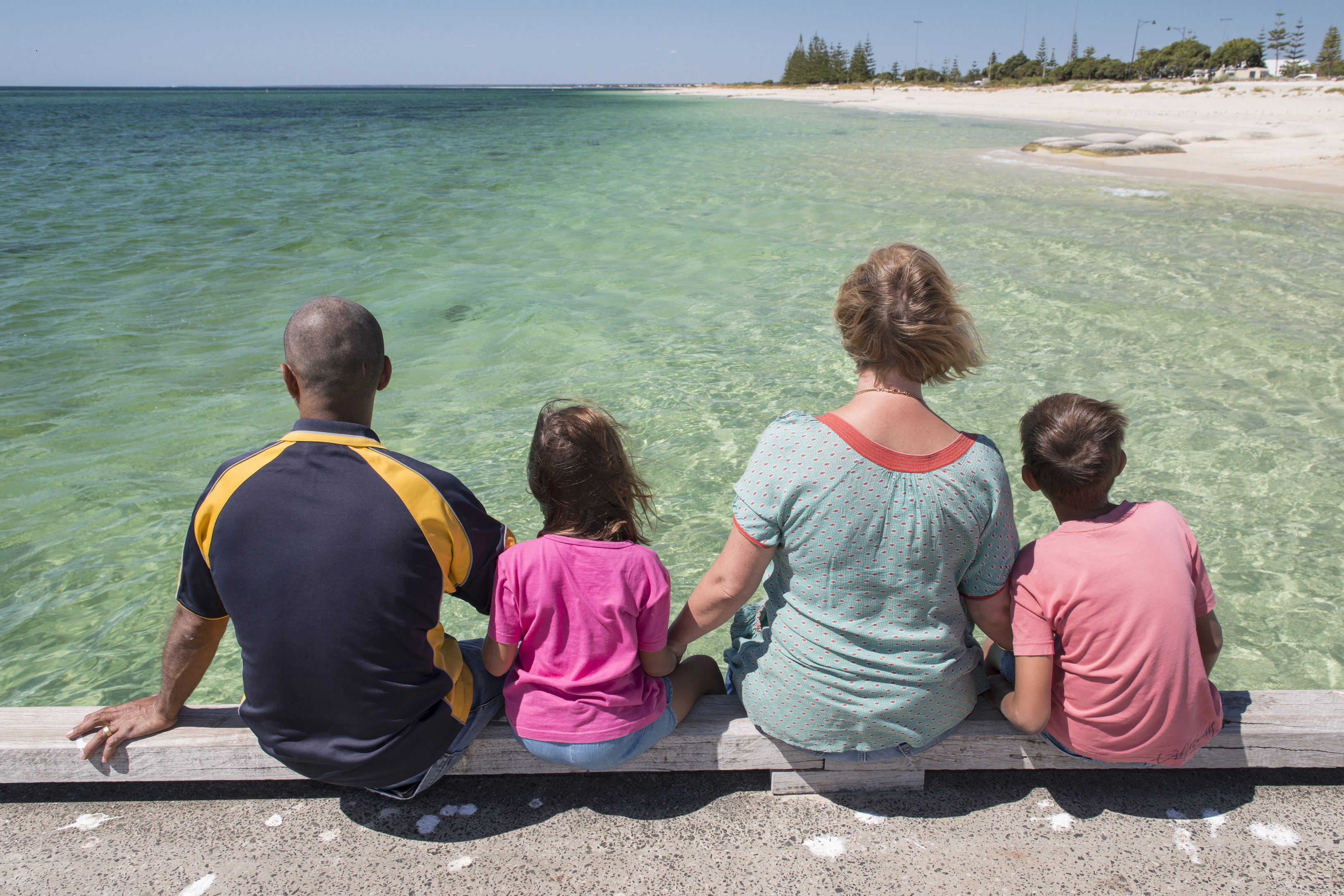 About two and a half hours drive south of Perth, Busselton boasts the longest jetty in the Southern Hemisphere that stretches out over the sparkling blue ocean. There’s white sand, great beaches, and Margaret River and its wineries are only 40 kilometres down the road. There’s no shortage of activities with boating, bike trails, camping and fishing.

Before Busselton, Kelly and Simone lived in Wickham in the Pilbara for nine years. “We love that we can have our own home here, so that was another drawcard,’’ Kelly says.

When you’re based in a residential mining town work is always present but it is much easier to switch off with fly-in fly-out work.

“As soon as you get out of there, you leave it totally behind you,’’ Kelly says.

When Kelly is at home, he doesn’t spend time checking his phone for work messages and can focus on the family and their activities.

“There's a lot more choices down here. It's a much bigger community.”

Finnley and Harper both do swimming; Finnley also does cubs and Harper does NetSetGO, the forerunner to netball. 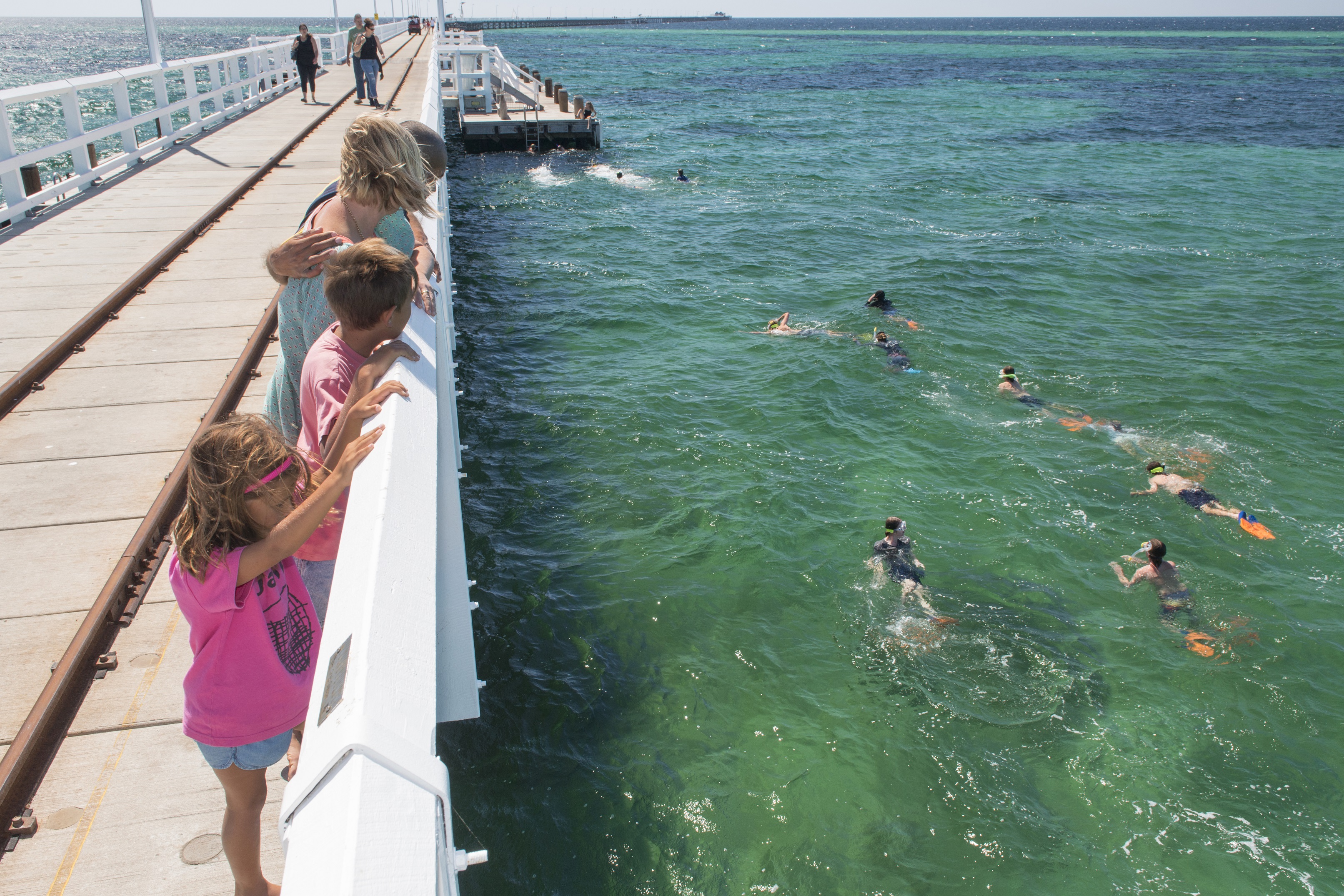 Rio’s regional source towns of Geraldton, Carnarvon, Broome, Derby, Albany and Meekatharra are also an important source of Aboriginal employees, contributing to the business’s diverse workforce while significantly bolstering the 12 per cent Aboriginal employment target recently achieved in the third quarter of 2017.

Rio Tinto also supports numerous partnerships in the city including funding a trainee youth development officer, supporting the Busselton Family Centre, Busselton Jetty and big events such as CinefestOZ and Busselton Ironman Volunteers. One of the other great ties for Busselton and Rio Tinto lies in the Busselton supporter base for the Royal Flying Doctor Service - one of Rio Tinto’s largest community partners.

Says Councillor Henley: “Our community partnership with Rio extends beyond just the workforce. We have the biggest film prize in Australia for an Australian film at our CinefestOZ in August, and Rio Tinto are major partners in that event. We have one of the world qualifiers for the Ironman held here in December each year. Over 2000 athletes and lots of family and friends come down for that event.’’

And, the 1000 strong volunteer program is supported by Rio Tinto.