As far as career changes go, Jodie Auster’s journey from emergency department doctor to leading the Australian arm of one of the world’s biggest disruptors has been remarkable.

She began her career as a doctor, then studied an MBA at Melbourne University’s Melbourne School of Business, had a stint in Silicon Valley, and is now the regional general manager of Uber Eats in Australia and New Zealand.

Since launching in Melbourne in April 2016 with 100 participating restaurants, Uber Eats now operates in 24 cities across Australia and New Zealand with 16,500 restaurants. The service allows people to order food, via an online app, which is then delivered directly to them by an Uber partner.

Uber is also assessing Australia as a possible international test site for commercial trials of Uber Air, a type of flying car which would have vertical take-offs and landings.

Ms Auster, who did some of her medical training in Geelong, told the Strong Australia community forum and broadcast in the Victorian regional centre in November 2018 that she could draw on her experiences in health care for a career in business.

“I took lots of skills that I learned in medicine – problem solving, explaining complex concepts to people who don't understand them, communication, triage, which is very relevant in the fast-moving world of tech – and I've been able to apply those in different contexts with a little bit of retraining.’’

As Australians prepare to adapt to technological change and future ways of working, the importance of lifelong retraining and reskilling was a central message at the Strong Australia events. 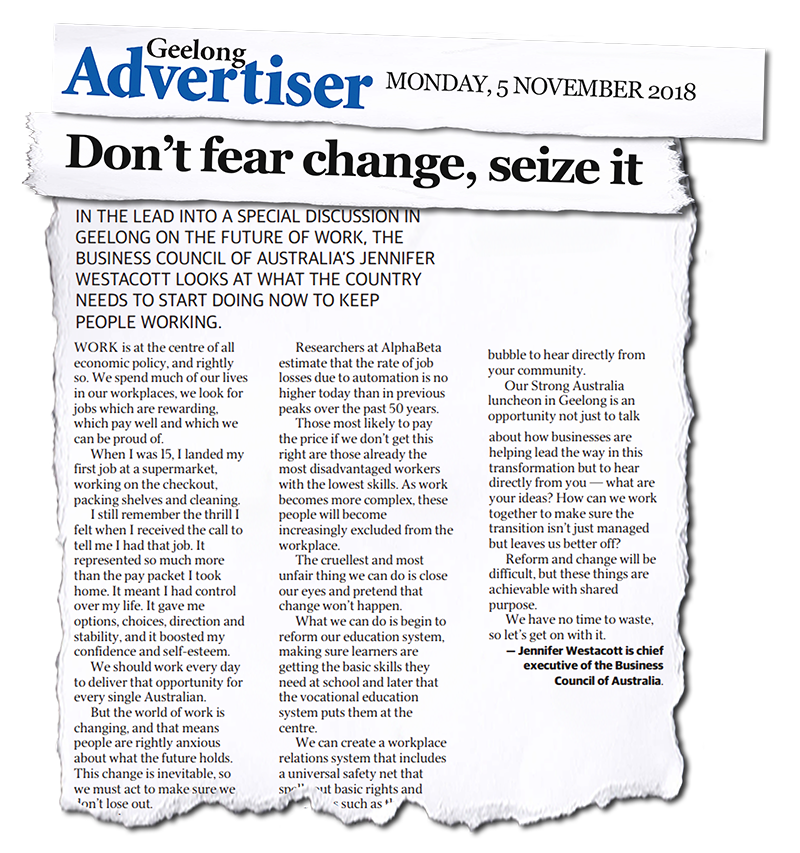 Jennifer Westacott, chief executive of the Business Council of Australia, said instead of being fearful about the future, Australians should be optimistic.

Australia is a talented and high-skilled country, with a good track record of adapting to change.

In 2018, the Business Council began a project with AlphaBeta to explore the forces of adjustment and transition in our workplaces.

Ms Westacott told the Strong Australia events the research shows the rate of job loss through technology hasn’t changed, and the rate of retrenchment had halved in the last decade.

The data, she said, showed the biggest impact of change would be on the tasks that make up jobs, rather than job losses.

Ms Westacott said the Business Council had proposed a Lifelong Skills Account where people could train, retrain and reskill throughout their lives, and business leaders continued to push for red tape to be reduced to make it easier for people to change jobs and for employers to hire workers.

Regional development, including developing the infrastructure to attract businesses and jobs, is another key area that needs to be addressed to help Australians manage the transition underway in the economy.

“We've got to embrace this because there are some fantastic positive community outcomes here but sitting back and being fearful is a way for it to run over us. If we lean into it, I think the opportunity is to shape it.’’

“We've got to make sure that we really invest in places like Geelong so that transition can be managed in a way that doesn't leave people behind,’’ Ms Westacott said.

Rohan Mead, group managing director and chief executive of Australian Unity, said different parts of the economy were responding more quickly than others to the transition.

“I think some of these places, some of these slower moving areas of the economy, are places where perhaps there's a higher residue of fear and concern,’’ Mr Mead said.

“We've got to embrace this because there are some fantastic positive community outcomes here but sitting back and being fearful is a way for it to run over us. If we lean into it, I think the opportunity is to shape it.’’

He said Geelong could be more adventurous in embracing some of the possibilities because it not only had physical infrastructure, but also good educational facilities and arms of government.

Tim Reed, chief executive of MYOB, said the demands on the education system continued to evolve and employers are looking at the traits of adaptability, flexibility, the ability to learn, the ability to work in teams, and emotional resilience. 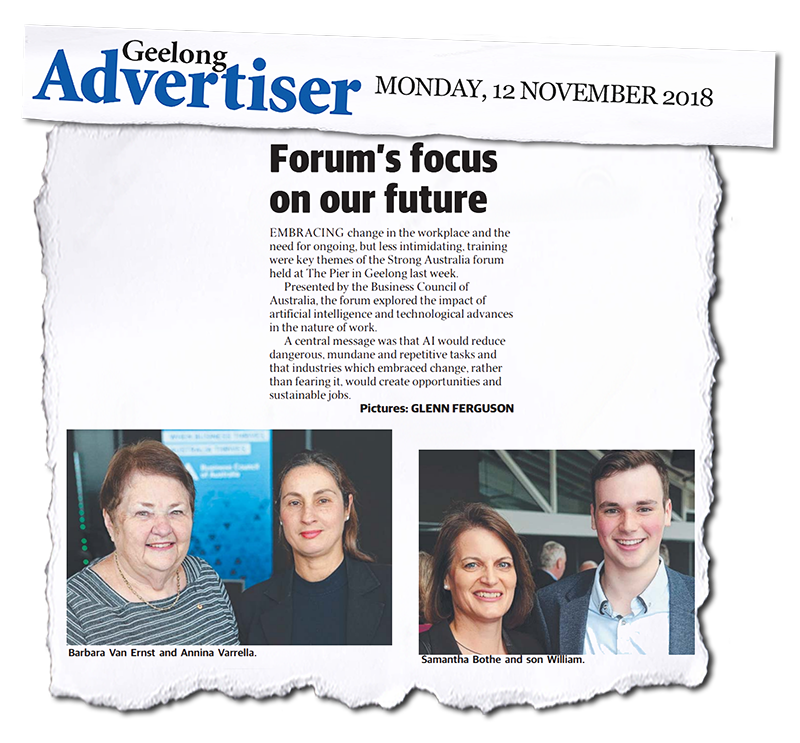 The changing nature of employment relationships as the economy changes was also raised during the Strong Australia forum along with the question of worker loyalty in the gig economy.

Ms Auster said the people who drive and deliver via the Uber app were independent contractors and they valued the flexibility inherent in their jobs.

“Some of them are retirees supplementing their income and they might drive a few hours a week every week for a really long time and that's one way that you could label loyalty,’’ she said. 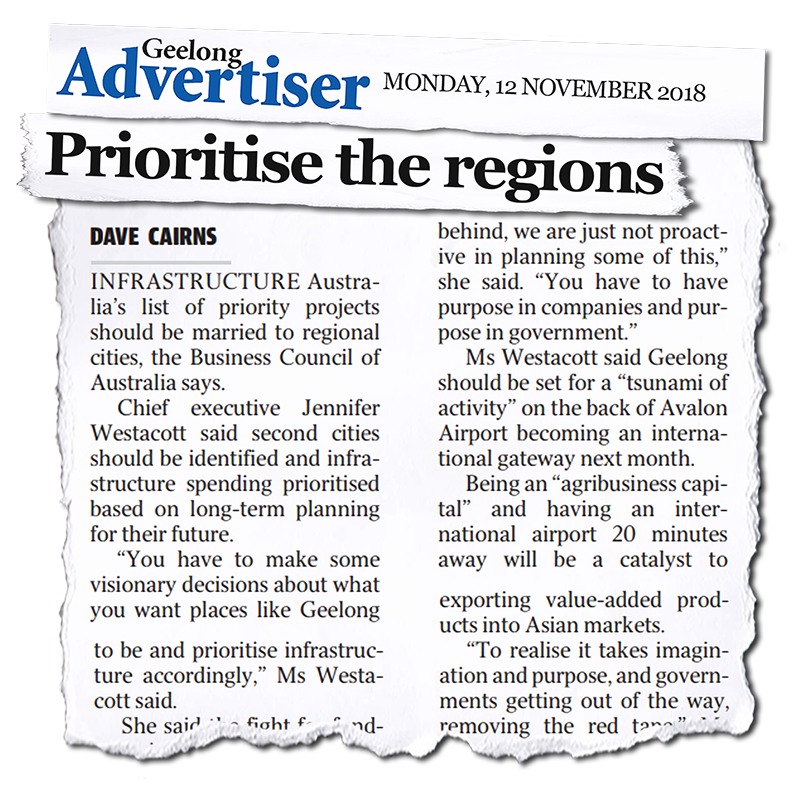 “Another one is somebody who has a seasonal job and once they get off their cruise ship as an entertainer they need some earnings for the winter season when the cruise ship is docked in the port.

“They might not, in the traditional definition of loyalty, be captured, but actually if they can be re-engaged then they might be loyal just on an annual basis,’’ Ms Auster said.

“So, I think there's got to be a broader thinking and definition around what loyalty is. So, if you provide a great experience for them when they're working, with our technology for example, then they'll think of you first when they're coming back looking for those earning opportunities.’’

Ms Auster told the later Strong Australia broadcast that a survey of 1,700 Australians who drive on Uber showed that 93 per cent of them did so for the flexibility.

“More than 80 per cent of them say that if they were on fixed shifts, if they had a different structure, they wouldn't choose to drive with Uber,’’ she added.

Mr Reed said it was important to remember that the proportion of people who are in permanent roles versus casual roles in the Australian workforce had been stable for the past 20 years.

“There's many businesses who rely on permanent employees and who are trying to create more flexibility for permanent employees. But that model is not broken either. I think there can be a fear that it is, and the data does not say that that's the case,’’ Mr Reed said. 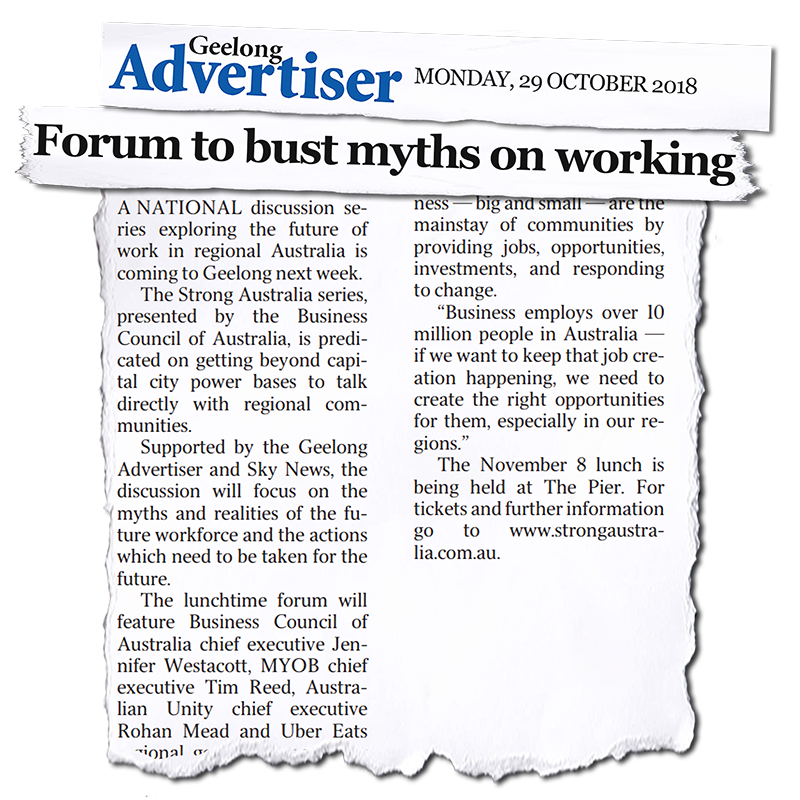 Mr Mead said in the provision of care and health services the community was demanding flexibility in the way services are provided, so it was important businesses considered how they could be delivered.

The challenge, Ms Westacott said, was to ensure workers had basic protections but if there was a temptation to over-regulate new industries and new ways of working, the opportunities would disappear.

“You've got to remember it's back to the consumer. Consumers have to pay for all of these things. So, the more rigid it becomes, the higher the cost,’’ she said, but added that no one wanted to see people working for nothing.

Mr Reed said at MYOB, technological change had meant their clients now saved about 20 hours per month doing administrative tasks such as bookkeeping compared to five years ago.

It freed up small business owners, he said, to spend more time with their families and have a higher quality of life. 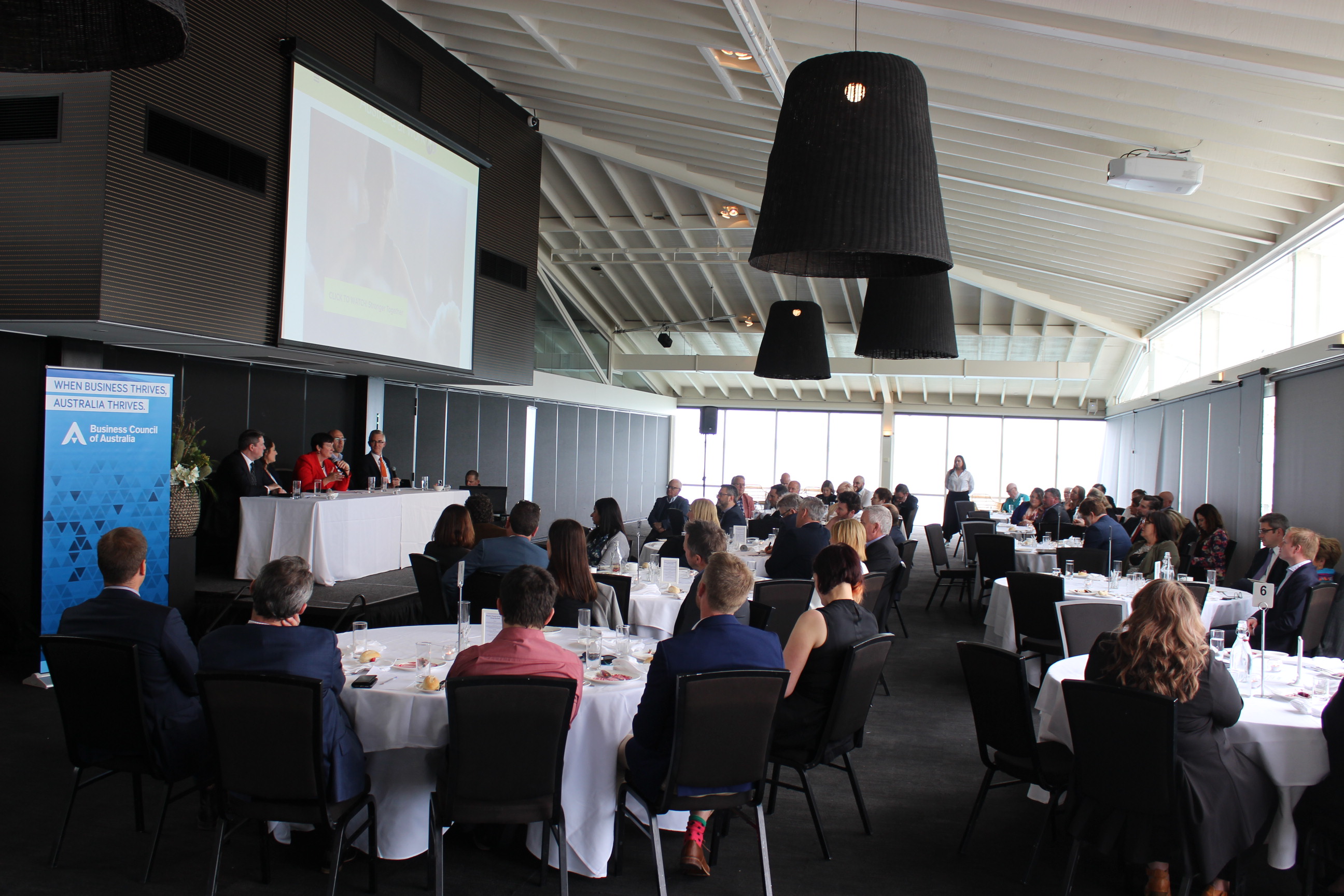 The Business Council’s BizRebuild initiative will reach a milestone this weekend handing out one million dollars in direct assistance to bushfire ravaged communities since the beginning of the year.

Tom Connell, host: Joining me now is Jennifer Westcott from the Business Council of Australia, the chief executive. Thanks very much for your time today, you were quoted yesterday talking...