This essay by Jennifer Westacott was published in The Australian on 12 April, 2017. It was the fifth in the 'Priorities for Prosperity' series, which explored key policy issues affecting Australia's future success as a nation.

Our energy system is the cornerstone of our economy, powering our industries, our cities and our homes.

Yet over the past six months our politicians have told us we have an energy crisis. How can that be when Australia has an abundance of resources including coal, gas, wind and solar?

Competitively priced electricity has provided the backbone of our manufacturing sector and positioned Australia as an energy-bowl for power-hungry economies around the globe. From such abun­dance, how can we now be fearing blackouts, such as those in South Australia, and face wholesale electricity prices nearly three times higher than a year ago? What’s let us down? Where did we go wrong? And, most importantly, how do we get out of this mess?

At its heart, this “crisis” is the natural consequence of an imbalance between supply and demand for different kinds of energy. For 50 years, customers used increasing amounts of electricity as reli­ability increased and prices fell.

The interconnection of states, creation of new markets and progressive privatisation of assets yielded big returns for state budgets and lower prices for customers as a result of competition.

The design of our east coast electricity market in the 1990s was world-leading, but it’s not for the faint-hearted. Electricity generators are paid only for the power they produce, and there is no real reward for being “available” to produce more should customers need it, or for providing other services to keep the lights on.

In Victoria, the US investors who bought many of the state’s electricity assets lost their shirts as customers enjoyed lower prices while the proceeds of asset sales were used to pay down debt.

In the black, white and ugly shades of grey that permeate ­energy and climate change policy, some technologies and fuels were demonised as “bad” while others were deemed “good”. Moreover, the “good” and the “bad” flipped and turned with different parties, different leaders and different levels of government.

The renewable energy target introduced by John Howard’s government in 2001 to drive investment in renewable energy was dramatically ramped up under Kevin Rudd. Additional generous subsidies were paid for solar, ­mostly by the states, and we now have 2.5 million solar rooftops.

As if the market weren’t distorted enough, power prices continue to be structured so that solar customers can avoid paying their fair share of maintaining electricity poles and wires, increasing the cost for everyone else.

Soaring investment in poles and wires, coupled with a raft of “green schemes”, caused retail electricity prices to double ­between 2008 and 2014. As a ­result, demand for electricity began falling substantially at the very time new renewables supply was being forced into the market.

The situation has now reversed. What happens when demand ­exceeds supply? Wholesale power prices rise, and the security and ­reliability of the system cannot be ensured.

New investment is required, without which we cannot deliver the security, reliability and affordability of energy supply that Australians expect. However, that’s easier said than done.

Businesses that invest in power generation are playing a very, very long game. Just the planning, permitting and construction of a power station — wind, solar or gas — can take several years, and any new coal-fired plant would take much longer.

Against this backdrop, every sudden policy shift or government intervention in the electricity market risks jeopardising, or at least confusing, private investment. Providing policy confidence is key.

This is why calls to repeal or ­extend the RET must be resisted. However imperfect, this target ­underpins significant investments and should be left alone. Any more changes would further chill investment right across the sector.

But while renewables have the benefit of emitting zero carbon, ­intermittent technologies such as wind and solar don’t provide the same range of services we get from coal, gas and hydro generation that are essential to keeping the lights on. The sun doesn’t ­always shine and the wind doesn’t always blow.

Wind and solar need a cost-­effective partner that can be available 24/7. In time, that will hopefully be storage technologies such as batteries or pumped hydro. But for the next decade, we had all assumed the critical partner to ­renewables would be gas-fired generation.

Except, hang on a minute, where did all the gas go?

The emergence of the liquefied natural gas sector, shipping Australian gas to global markets, significantly increased the volume of gas produced, employed many thousands of people and boosted export earnings. However, this growing demand has not been met with new gas supply.

Lobbied by the very same activists who want a rapid transition to lower emissions electricity, state governments delayed or restricted new gas development. Countless independent reviews have urged governments to assess projects ­individually on the basis of science, rather than impose blanket moratoriums on the basis of politics, but to no avail.

This has created challenges for the domestic gas market. The price and terms of domestic gas contracts are now very different, if available at all. Gas supply is a critical issue for both electricity generation and industrial gas users, making it a major threat to jobs.

Ridiculously, thanks to misguided climate activists, for the first time in 15 years we’re back to talking about prospects for new conventional coal-fired stations.

Our immediate focus must be on restoring the security, reli­ability and affordability of our ­energy systems. However, we cannot ignore the need to transition to a lower-emissions future. Achieving this will require new and continuing investment in our elec­tricity system. Increasing infor­mation ­about expected supply and demand — including how much fuel is available, and which large generators and consumers are proposing to withdraw from the market over the following three years — would boost investors’ confidence to make big ­decisions.

But what else will it take to drive new investment?

Consider this from an investor’s perspective: if you had $2 billion, would you invest it in Australia’s east coast electricity generation market? Wholesale electricity prices are certainly high, signalling to investors there’s money to be made.

Perhaps you would invest $2bn in a coal-fired power station? How­ever, the plant would take three decades to recover its costs. Would you feel confident betting on Australia’s energy and climate change policy framework for the next three years, let alone the next 30? Could you convince your financiers, shareholders and customers that it’s a good long-term investment in the context of global climate commitments?

Maybe a safer bet would be a new, super-efficient gas-fired generator? Gas could play a strong role in delivering our 2030 emissions reduction target, while supporting renewables over the longer term. But would you still be profitable if the next government increases our 2030 target, as the federal opposition proposes? Where will you secure a flexible, competitively priced gas contract when politicians in Victoria, the Northern Territory and effectively NSW have choked off new supply?

Could you invest in renew­ables? There’s already a federal target in place, and some great low-cost wind and solar projects in NSW, Queensland or Western Australia. But wait. Victoria has its own renewables scheme, so you could get a bigger taxpayer subsidy and build a more expensive project there. Yet surely that policy can’t last in a “national” market. It didn’t the last time Victoria tried it.

For the sake of argument, let’s pretend you do have the confidence to invest. SA is now planning to build its own power station. With no idea where to invest, would you? No, and neither will other private sector investors, as evidenced by AGL shelving plans for new generation in SA.

When governments start putting taxpayer funds — our money — into electricity markets, they had better be ready to keep going. Why divert money from hospitals, schools and roads to energy infrastructure the private sector would deliver if given half a chance?

Remember that plants are ­already closing. Without new ­investment, the supply-demand balance will be tight, prices will ­remain needlessly high, and the increasing penetration of renew­ables will mean the system may not be both secure and reliable.

If new investment is key, what are the long-term, stable signals that will encourage that investment? Several modelling exer­cises, and those very companies that would invest in next-generation power stations, favour an “emissions intensity scheme” for the electricity sector as the lowest-cost option. An emissions intensity scheme — through which heavier emitters subsidise lower-emitting technologies — has the added benefit of not putting pressure on consumer prices.

However, it’s important to get the timing and design of any EIS right. If implemented hastily in the short term, it could force the closure of several brown coal-fired generators in the Latrobe Valley early next decade, placing pressure on system security and ­regional communities all at once.

In the absence of an emissions intensity scheme, an emissions standard or emissions cap could be applied to coal-fired power stations based on the end of their 50-year technical life. The require­ment to close could be subject to a national interest test if the generation capacity is required for system security or reliability.

While less efficient than an emissions intensity scheme, it would be an excellent start and the transition may be easier to manage and provide clearer signals for new investment in the electricity system in the short-term.

Given Australia’s coal-fired generation fleet was largely built in the 1970s, 80s and 90s, both brown and black coal-fired power stations would be expected to close in a staggered way across multiple regions over time.

As the electricity market is ­already at prices that will encourage new supply, this type of regulation is unlikely to have a significant impact on price but would provide a strong signal for new investment, which is ultimately what will ensure prices are as low as possible.

Doing nothing is not an option. The government of the day can swear on a thousand bibles that there will never be restrictive policies on carbon emissions, but ­investors don’t believe it and they haven’t believed it for more than a decade.

No government lasts forever and until investors see the Coal­ition and Labor standing side by side, providing long-term policy confidence, their chequebooks will remain closed.

Some say it’s naive to expect ­bipartisanship on energy policy. I would agree if secure, reliable, ­affordable power were an optional extra for Australia — but it is ­essential. It’s beyond time the government, opposition, states and business sit down together and end the culture war. At least for electricity. The Business Council is happy to facilitate this if needed.

Without a long-term signal for investment, the next government will face an even tougher problem than we have now, and it will be taxpayers who foot the bill via less secure power, soaring prices and fewer jobs.

Jennifer Westacott is chief executive of the Business Council of Australia 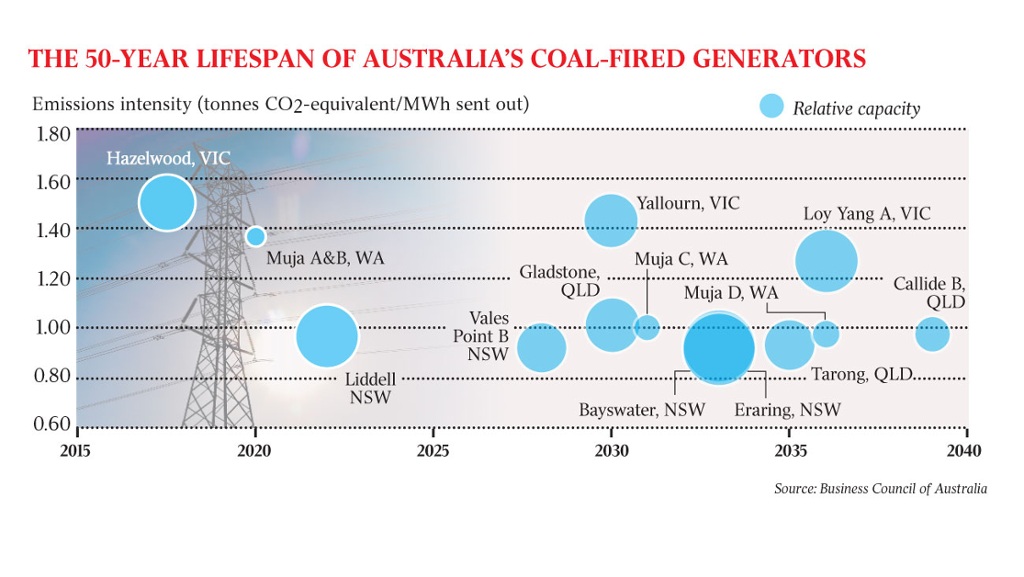