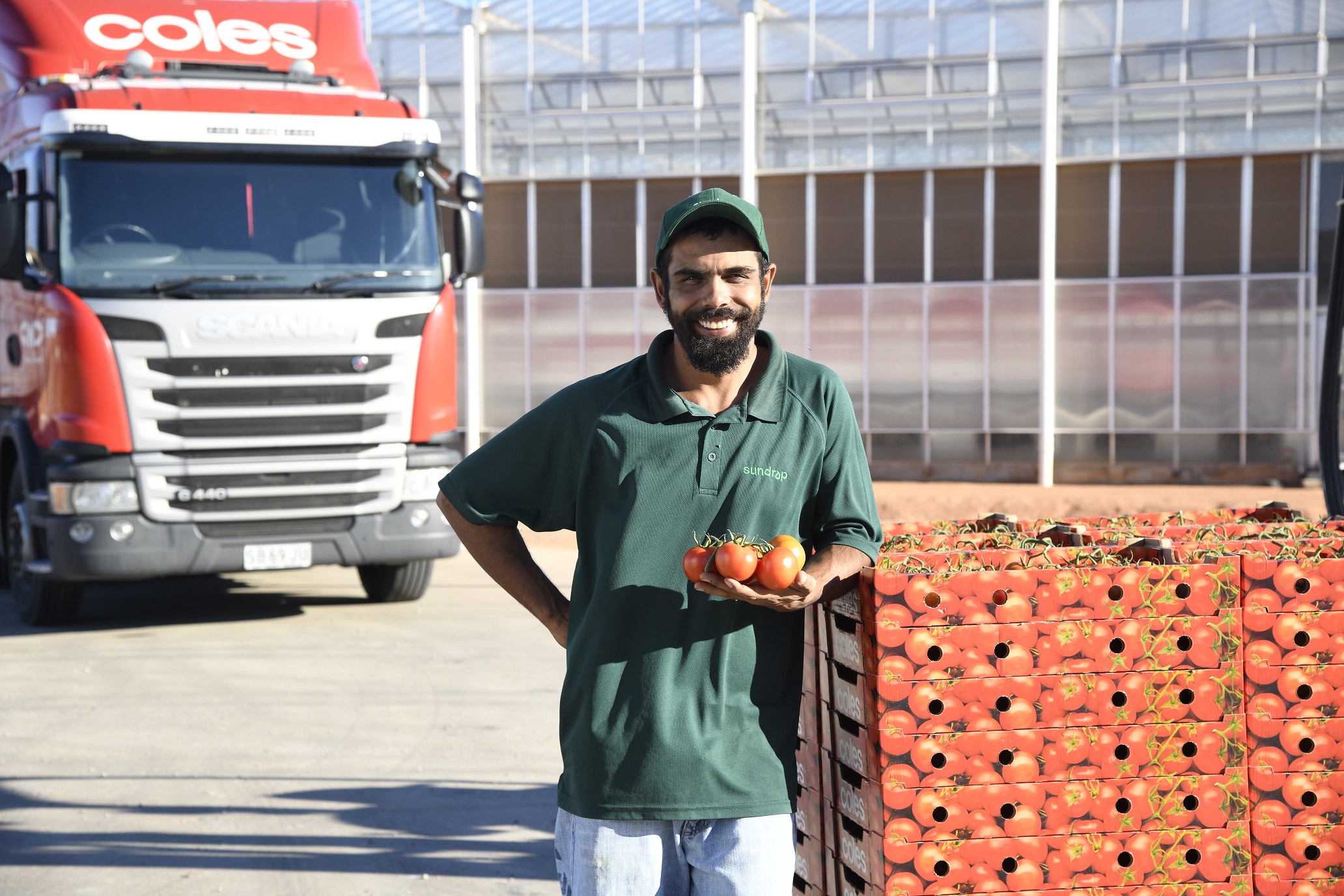 About 1000 kilometres from Melbourne’s Flinders Street Station or about 16 hours’ drive from the heart of Sydney lies an oasis surrounded by parched earth.

The large truss of vine tomatoes found on the shelves of Coles supermarkets across Australia are grown at Sundrop Farms on the outskirts of Port Augusta in South Australia.

The $200 million agribusiness, located in one of the sunniest spots in Australia and one of the most arid, is a feat of innovation, ingenuity and vision.

The decision by Coles Supermarkets to enter a pioneering 10-year supply agreement with Sundrop gave the project the certainty to fast-track its scale of production.

“It also allowed a greater investment by the supplier into the technology,’’ he says. “Without that contract, we couldn’t have invested so much into what we’ve built at Port Augusta.’’

The result is staggering and represents the future of horticulture. Under clear skies, Sundrop combines different types of technology – solar energy, water and greenhouse systems – to produce high quality tomatoes every day of the year. They produce up to 15 million kilos a year or about 100 million single tomatoes.

“The greenhouse technology allows us to have a more controlled, stable environment and optimise that environment for tomatoes,” Mr McOmish says.

Construction of the 20-hectare solar-powered greenhouse, located at the top of the Spencer Gulf, was completed in 2016. It uses a state-of-the-art solar tower to produce energy to power the growing systems and to heat and cool the greenhouses.

The tower, which can be seen from kilometres away, is 127 metres high and has approximately 23,000 mirrors pointed at it. Sundrop’s water comes from the Spencer Gulf, and is desalinated using a Multiple Effect Distillation system. 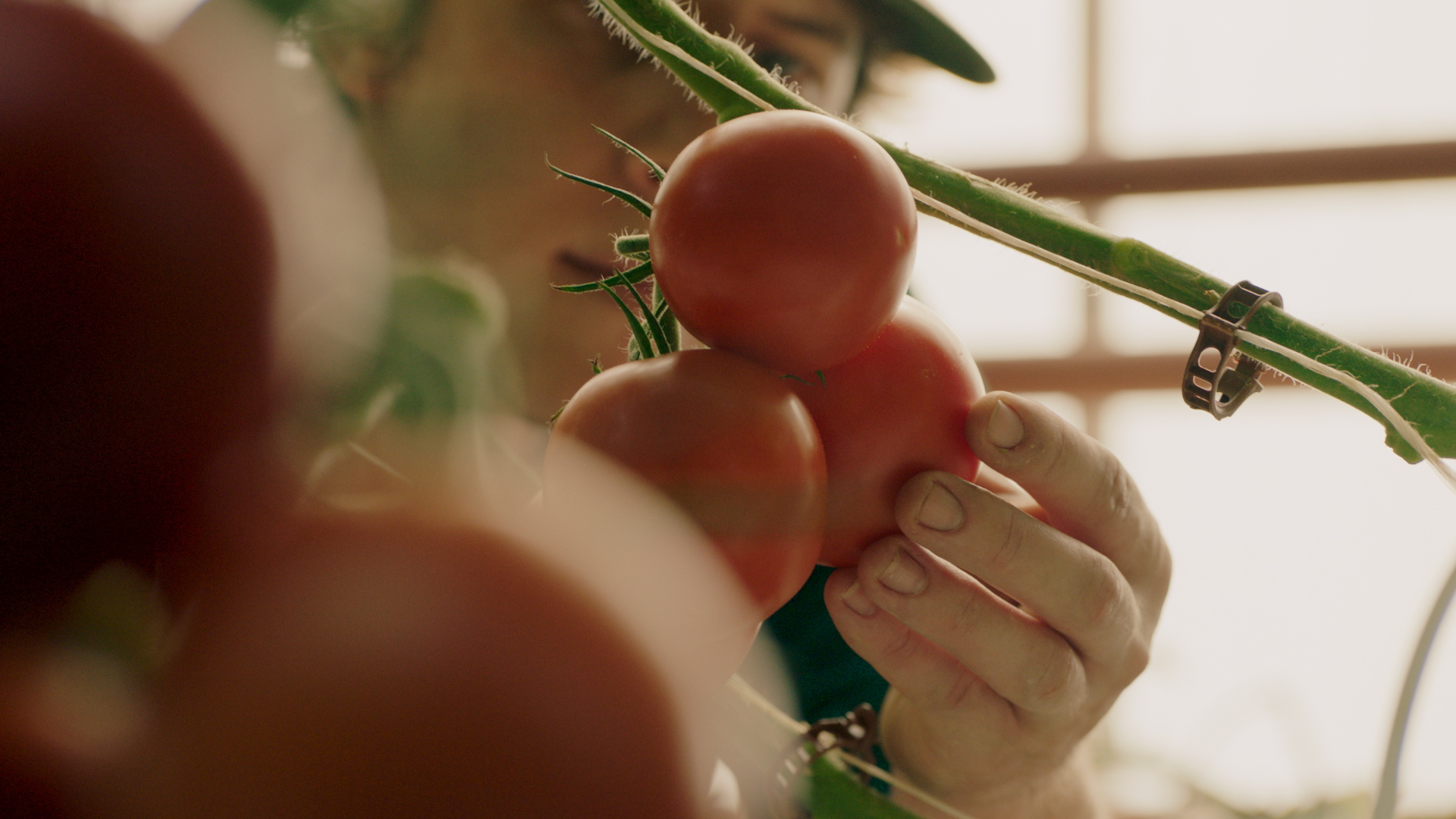 Water is reused and there is minimal waste. The tomatoes are tended to by hand, and Sundrop even controls pests through an integrated pest management plan which includes ‘good’ bugs eating ‘bad’  bugs.

“If I think about what other people have done in Australia with a greenhouse who don’t have a contract, what they’ll typically do is they’ll build five hectares,’’ Mr McOmish says.

“Then, they’ll run five hectares for a couple of seasons, make some money off that and then they’ll expand to 10, then 15, then 20 hectares. Then they’ll add a bit of technology around that but they take multiple years to reach critical mass.’’

With the Coles contract, Mr McOmish says, Sundrop was able to “go straight to 20 hectares with all the technology and investment up to $200 million into the project from day one’’.

The partnership not only accelerated development but lessened the risk so Sundrop was able to attract high calibre and quality investors, including leading global investment firm Kohlberg Kravis Roberts. Sundrop was also supported by the Commonwealth Bank, which has a deep understanding of the corporate agribusiness sector and offers specialised project finance to support innovation and growth.

The decision to invest means Sundrop is now one of the largest employers in Port Augusta and it has stepped into the void that was created when the power station closed.

Each day there are at least 200 people on site, and during peak times this swells to 260 workers. Just over half of the workforce are local with others from outside the area, which includes the federal government’s seasonal worker program for Pacific Islanders.

“It brings diversity and new technology and has assisted in opening the region up to being a renewable energy hub,’’ she says. “The use of alternative energy such as solar thermal to grow tomatoes all year round in such a harsh outback environment has opened the door to other similar prospects as well as showcasing what the region has to offer and the possibilities that exist here.’’

“Employment-wise, Sundrop Farms is a significant employer in the region, and we note the business has worked extremely hard in focusing on local and regional employment opportunities,’’ Ms Wiseman adds.

“Sundrop Farms, both in its original pilot plant construction and then expansion, has been a good supporter of local content which has seen significant benefits to our local businesses in supplying services and goods both in the construction phase and now in their ongoing operations.’’ 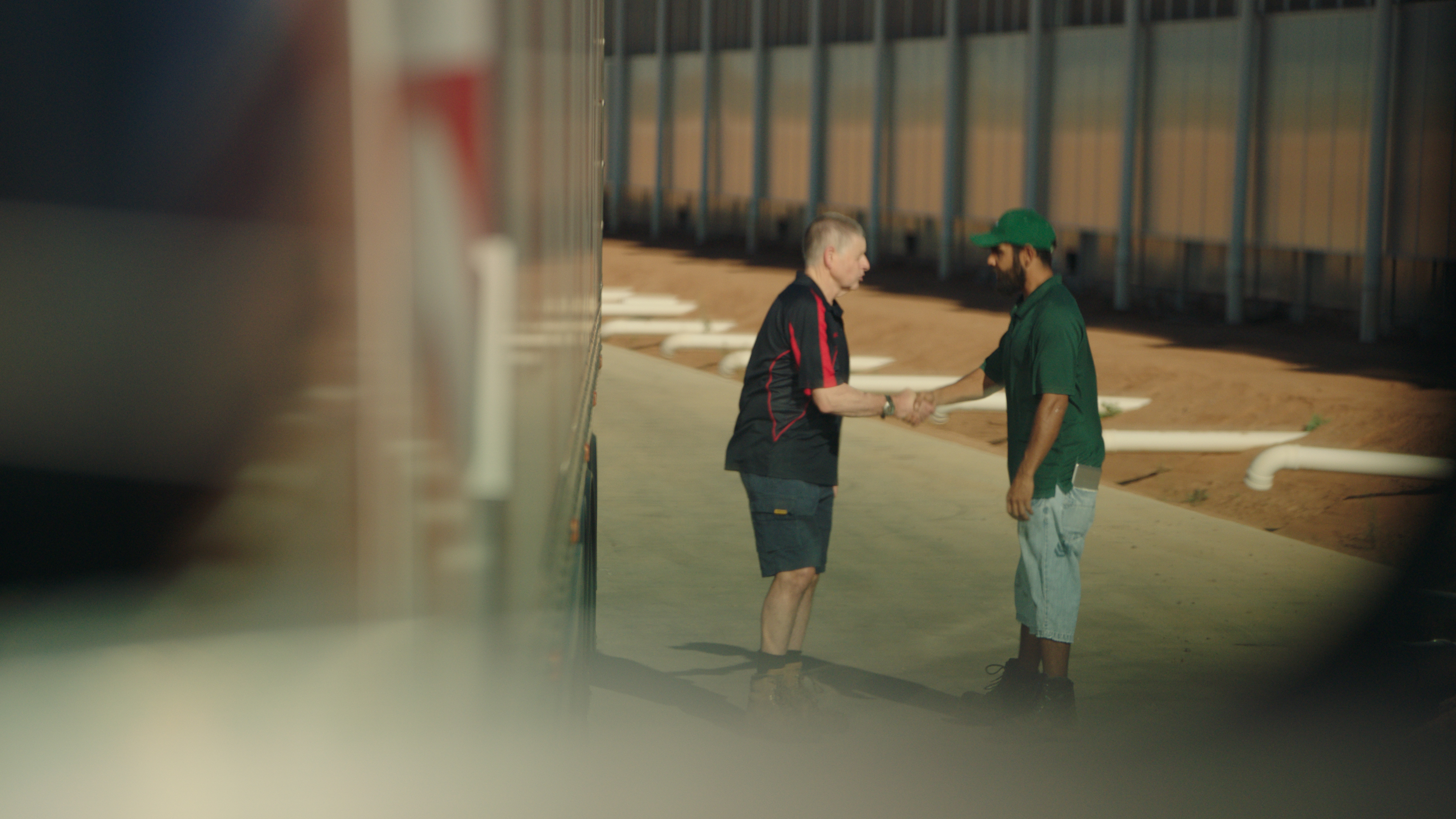 Mr McOmish agrees that in general the broader Australian community has little understanding of the risk a business takes to embark on a venture of Sundrop’s ilk. “I think it did take a huge amount of vision and a huge amount of courage to invest $200 million into a regional area that has no history of tomato or horticultural production.

Ms Wiseman points out that a few years ago the closure of big employers, the Port Augusta power stations and the Leigh Creek coal mine, hit the region hard and many smaller businesses folded.

“When such a major employer closes its doors the effect isn’t just felt by the employees, it has a flow on to local businesses, with consumers reducing their ‘luxury’ spending, resulting in the confidence in the local economy decreasing,’’ she says.

“This in turn creates many social issues and decreases the vibrancy of the town and region.  However, when new businesses such as Sundrop Farms come into the region and offer diversity of industry and diversity of job opportunities, it creates a more positive environment and the town and region gains confidence and starts to spend money again locally, supporting local businesses.’’

Ms Wiseman says two years ago there were many vacant shops in Port Augusta’s central business district but “over the last six months we are seeing a number of new businesses starting up filling those vacant shops in the CBD.  This is a direct result of business and consumer confidence encouraging existing businesses to keep their doors open and the confidence in the economy for new ones to open up.”

One of the other blind spots is education and preparing the next generation for the skills they will need in a changing workforce, particularly with specific tertiary courses to address advances in horticulture and agribusiness.

“We certainly view greenhouses as the way forward … high intensity mass production through greenhouses for food is absolutely the future,’’ Mr McOmish says.

“You can do more production, you have less footprint and you can have a higher degree of confidence around all-year supply so I think that’s certainly the future. You’re already starting to see it.’’