The February 2021 labour force data showed employment surged with 89,000 Australians finding work and the unemployment rate dropping sharply from 6.3% to 5.8%. The overall labour market is in a strong position heading into the end of JobKeeper this month.

Across Australia, around 96% of jobs lost or workers stood down in April 2020 have returned to work. This represents over 1.2 million Australians back at work. Total employment has recovered to its March 2020 level, with full-time employment up 0.2%, while part-time employment is 0.4% lower than March levels.

Over 876,000 jobs were recovered or created nationally since May 2020. Treasury estimates there are around 900,000 Australians supported by JobKeeper – around 7% of workers. JobKeeper will end on 28 March and data on the preliminary impact of this transition will likely first be available at the end of April. The impact of the end of JobKeeper is a key unknown for the labour market going forward.

Young people (aged 15-24) remain the most adversely affected cohort in the labour force, with 74,000 young people still out of work compared to March 2020. In contrast, there are 145,000 more people over 35 in employment than there were before the crisis. The national participation rate held steady in February at 66.1% – close to a record high.

Hours worked rose 6.1% in February – the biggest monthly rise on record. The number of Australians who worked fewer hours than usual rose slightly to around 550,000. People employed but not working any hours rose to almost 130,000 in February and is above its pre-crisis level. This largely reflects the impact of the Perth and Victorian lockdowns.

Growth in the labour force has been slow without growth from migration during COVID, growing at 0.8% over the year, substantially lower than the 2.1% growth over the year to February 2020. This has reduced the impact on the unemployment rate of slow labour demand growth over the last 12 months.

There are 3,600 more people employed compared to March 2020, only just under the record employment from February 2020. 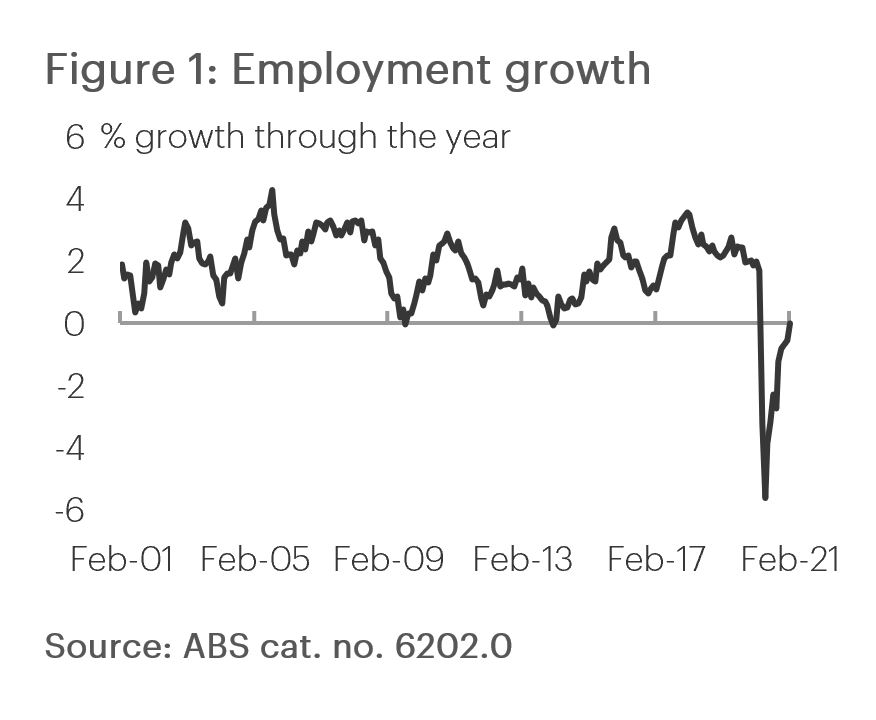 Table 1: National impact of the crisis on the labour market 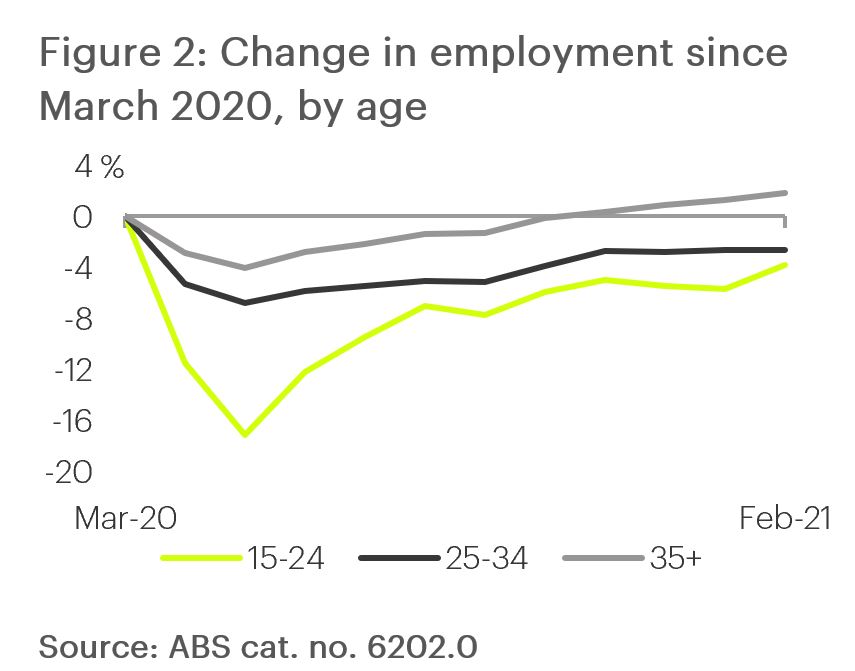 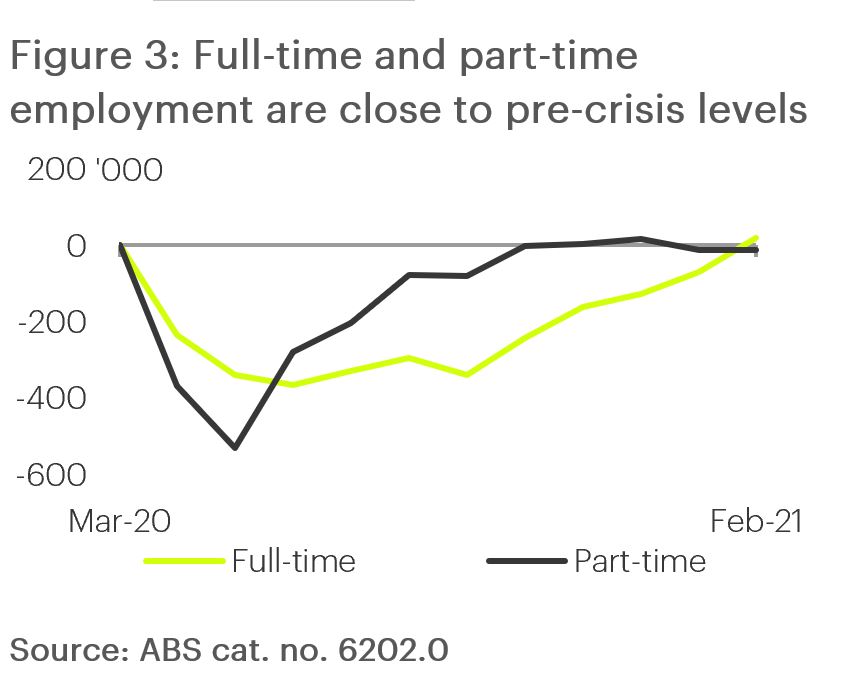 The unemployment rate dropped from 6.3% in January to 5.8% in February. 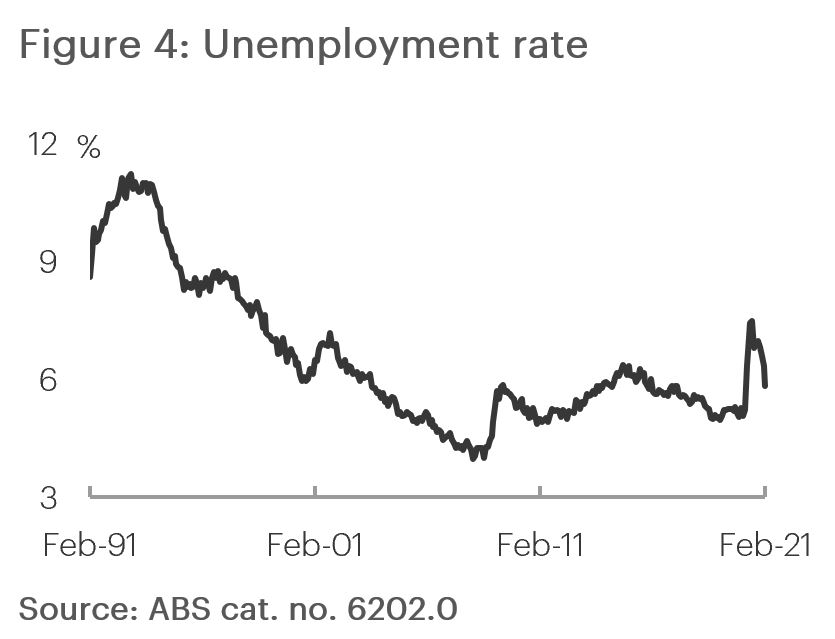 The participation rate held steady at 66.1% in February.

Around 19,000 people joined the labour force in February.

The youth unemployment rate dropped to 12.9% in February from 14.0% in January, despite the participation rate increasing by 0.3 of a percentage point to 68.6%.

Hours worked had the largest monthly rise on record, up 6.1% in February 2021. Hours worked are now down just 0.7% compared to the start of the crisis. 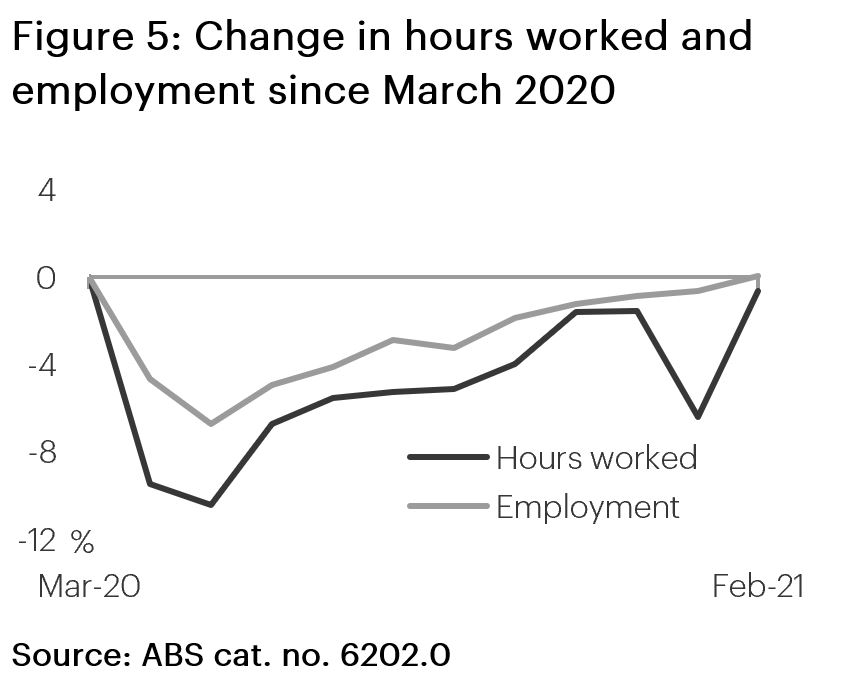 The employment to population ratio rose to 62.3% in February. The ratio is down just 0.2 of a percentage point compared to March 2020. 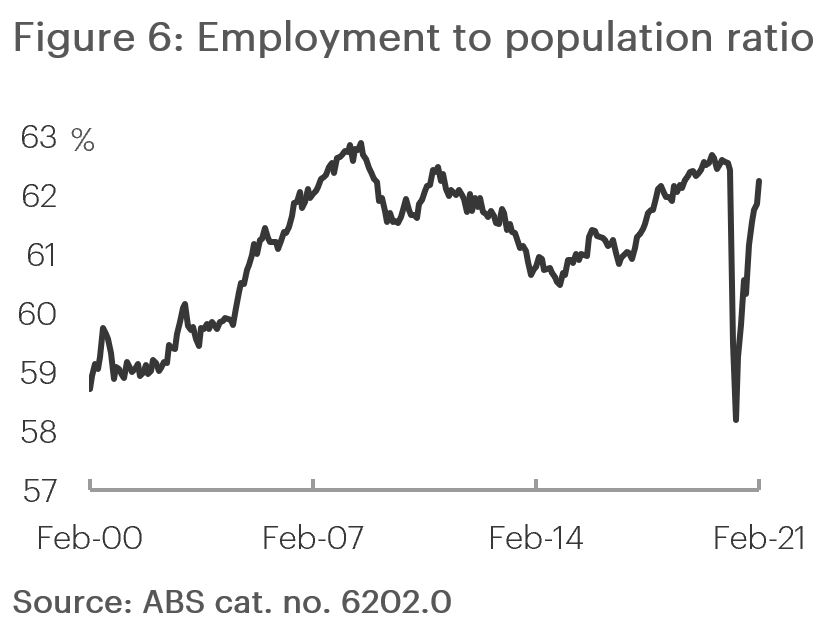 The underemployment rate rose to 8.5% in February 2021, roughly on par with its pre‑crisis level.

There are 29,000 fewer people reporting they are underemployed than in March 2020.

Key points Management of the Delta variant of COVID remains the dominant factor influencing the Australian economy. The costs of lockdowns are accumulating in Australia while the rest of the...

Key points The global and Australian economies are bouncing back. Australia's recovery is evident in the March quarter National Accounts. Recovery in Australia and elsewhere has been driven by unprecedented...

GDP growth rose 3.3% in the September quarter 2020 – the largest quarterly rise since 1976 and at the upper end of market expectations. Growth was supported by the lifting...