This opinion article by Grant King was published in The Australian Financial Review on 27 June 2017.

Much of the political debate about important changes Australia needs to make is focused around one question: what is fair?

Never has this been truer than for the discussion around the federal government's Enterprise Tax Plan, which would reduce to company tax rate to 25 per cent over ten years. The most common criticism of the plan is simply that it "isn't fair". However, this claim rarely gets the scrutiny it deserves. Contrary to the criticism, a failure to implement the plan will inflict a greater unfairness on Australians.

Business Council of Australia members believe the fairest thing we can do is create more jobs and grow incomes, because this creates the prosperity that can be shared across the community.

Only business can sustainably achieve this, but it needs the right policies and incentives in place – hence the government's Enterprise Tax Plan and our support for it. 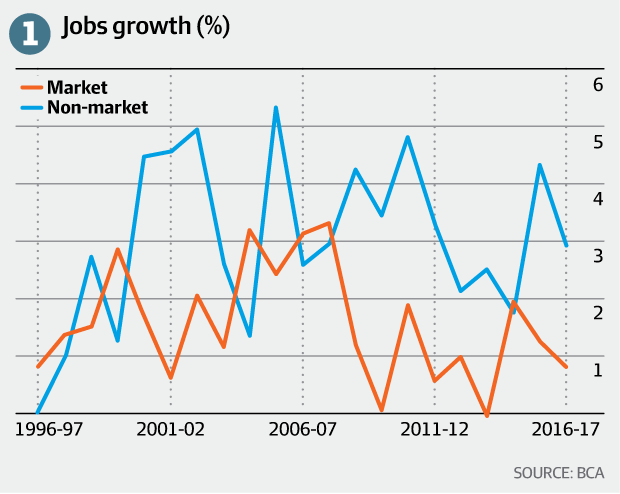 First, let's look at job creation in Australia (Fig 1). Over the past decade, almost half of new jobs have emerged in sectors in which the government is heavily involved such as education, public administration, health and aged care. These are all important jobs, but they are also more likely to be funded – at least in part – by redistributing tax dollars earned in the "market sector" of the economy. The reduced relative contribution of private sector jobs to overall employment has been disguised by the rise of taxpayer-funded jobs.

Opponents of the Enterprise Tax Plan argue, implicitly or explicitly, that reducing tax revenue will reduce government's scope to maintain and expand the public sector workforce. However, this logic leads to a dead end. Government can't sustain jobs growth through increasing taxes indefinitely, since the required rises in taxation would further deter business investment and private sector job creation.

To the contrary, we must restore the incentives for investment – as investment drives private sector job creation – if we are to have sustainable growth in employment.

Wages growth, which has been slowing over the last five years, is becoming a real concern for many, especially as Australian households have among the highest levels of debt as a share of GDP in the developed world. Many Australians face the real challenges of housing affordability, the prospect of rising interest rates and cost of living pressures. (Fig 2) 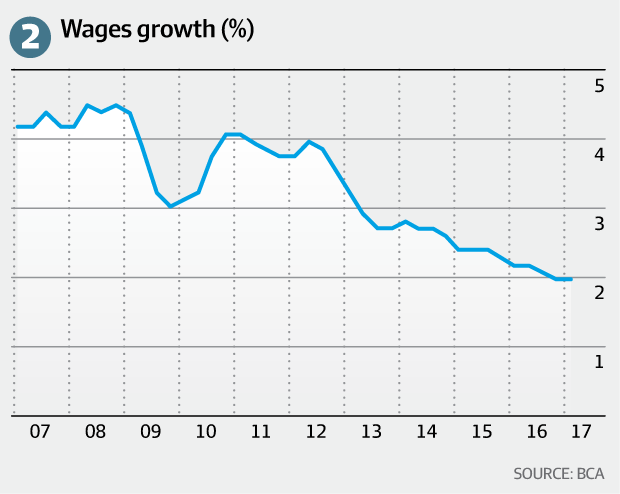 We can't control commodity prices, we can control productivity

Falling per capita income growth over recent years reveals an essential truth about the Australian economy – we are highly exposed to changes in our terms of trade.

The only consistent driver of sustained productivity growth has been investment, with other factors having a net-neutral effect over the longer term. Productivity growth over the past ten years has nearly halved compared with the previous decade and languished persistently at that lower level compared to the prior period. 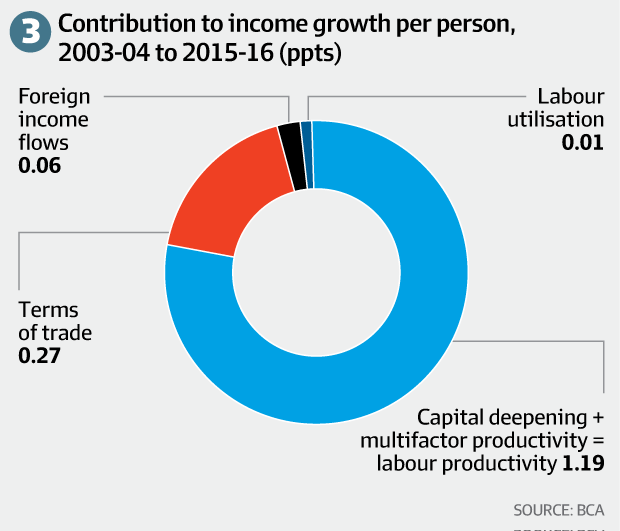 The conclusion is simple. Income or wages growth relies on productivity growth, which in turn depends heavily on business investment.

We must do better than this because our failure will result in fewer jobs, lower income and higher debt for both households and government. Given the prosperity we could enjoy, this is unequivocally unfair to all Australians.

So how do we incentivise increased business investment? 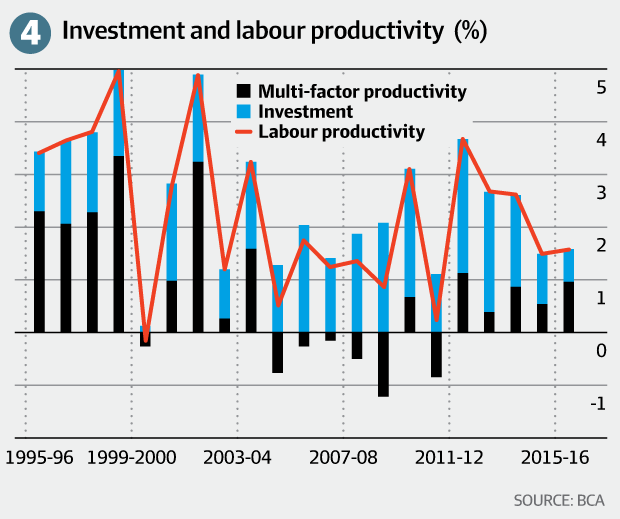 We are a large country with a vast legacy of opportunity in export orientated sectors such as agriculture, resources, tourism and education but our small population cannot save enough to develop them. We have always relied on overseas capital to fund the development of our country. The level of foreign investment in Australia is over $3 trillion.

That means a globally competitive investment environment is essential if Australia is to be an attractive destination for companies.

It also means that our high tax rate matters … a lot

It seems the case for incentivising greater business investment is clear. 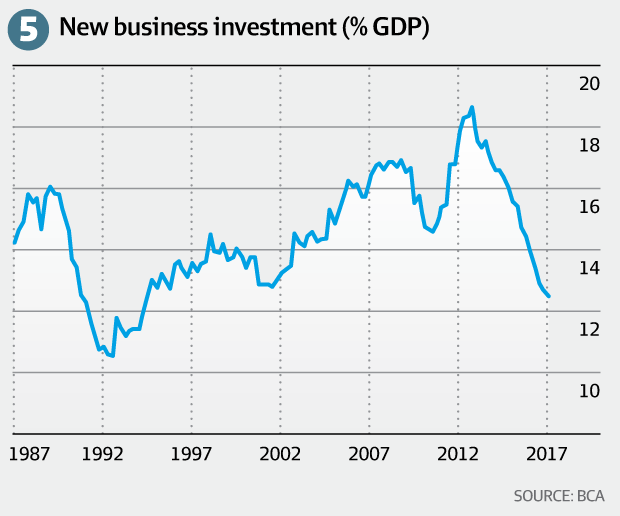 A globally competitive company tax rate isn't the only factor influencing business investment decisions, but it is one of the most direct and effective economy-wide policy levers we have for driving higher domestic investment by local and global companies. Other countries know this and have been, and are planning to, reduce their company tax rates while Australia has stood still.

Businesses invest to expand their operations, to build new factories and plants, to buy state-of-the-art machinery and equipment and to develop and adopt cutting edge technologies.

Investment drives higher output and more efficient production. It increases business revenues and profits, leads to more people being employed and increases output per worker which allows higher wages to be paid.

As BHP chief financial officer Peter Beaven told The Australian Financial Review Business Summit in March, it is tough for investment ideas to get a green light within companies because global competition for capital is so fierce. Australia needs to be on the right side of those decisions and cutting the company tax rate will help ensure this.

The Government's Enterprise Tax Plan is therefore critical. It is the only plan on the table that will drive jobs and income growth, increase prosperity and lead to fairer outcomes for all Australians.

Many still oppose this plan. We can't speculate on their motives but we can respond to their arguments. At the forefront of opposition is the claim that business isn't paying its fair share of tax. So, let's look at the facts.

Australian companies pay a lot of tax by any measure

Given these facts, how much more do opponents of the Enterprise Tax Plan think companies should pay? Should we aim to impose the highest taxes on business in the world, even though we are a net capital importer? To do so would provoke an argument not about fairness, but about stupidity.

Despite the tax numbers, opponents claim that businesses are not paying the tax that they should anyway.

Australia's integrity measures are among the most robust in the world and we have supported recent tough measures. We are strongly supportive of the Tax Transparency Code, with 59 of our members, who together paid over $24 billion or 37 per cent of company tax in 2014-15, already signed up.

But responding to residual tax avoidance by delaying company tax cuts would not target the issue and only harm income and jobs growth.

Company tax is paid on profits not revenue

Another related fallacy being promoted by opponents of the Enterprise Tax Plan is that the fairness of a company's tax burden can be judged by its revenue.

Such nonsense reflects a complete lack of understanding as to how businesses, large or small, operate.

Comparisons between taxes paid and total company revenue are spurious. The ratio of profits to revenue varies across firms and industries reflecting their input costs, such as wages and capital intensity.

The benefits will not take 20 years to arrive

Claims that we'll have to wait 20 years to see benefits misunderstand how investments work. Investments deliver a stream of benefits over the life of the asset.

While it's true that the total accumulated benefits take time to flow through, that is the case for any economic reform that triggers investment responses – pretty much all of them – including investments in education where the benefits accrue over a person's entire lifetime.

Australia has fewer than 4000 large businesses (defined as businesses that employ 200 or more people), each employing more than 200 people – more than 3.5 million in total. These enterprises undertake the lion's share of investment and exporting in the Australia economy, innovate more, contribute almost 30 per cent of GDP and have been responsible for 540,000 new jobs – or around 60 per cent of private sector net jobs growth – in the last seven years. Indeed, last year large businesses drove all jobs growth, creating 80,000 jobs in net terms, while small and medium businesses lost 14,000 jobs.

They also paid almost two-thirds of the $68 billion in company tax collected in 2014-15. They support thousands of regional jobs and small local suppliers.

Any failure by parliament to fully implement the Enterprise Tax Plan would see Australia miss out on the bulk of the investment gains and lock in a two-tier tax system that will undermine growth as successful small businesses are discouraged from expanding.

Last year's pre-election tax reform debate famously started with "everything on the table" – including company tax, the GST, personal income tax and capital gains tax – before political pressures tipped almost everything off the table. However, just because we can't do everything, it doesn't mean we shouldn't do something.

The full-year revenue impact on the federal budget of a five-percentage-point reduction in the company tax rate is estimated to be around $8 billion net in today's dollars. Certainly, this grows over time as the economy grows, but so do the benefits.

Not proceeding with the Enterprise Tax Plan because of its revenue impact would be short-sighted and counterproductive. Independent Economics estimates more than half of the initial revenue impact will be recouped as the resulting economic expansion generates higher tax revenues.

More importantly, as Treasury estimates, aggregate activity would be bigger by 1 per cent a year and national income 0.6 per cent higher, in perpetuity. In other words, the total pie expands. This pay-off is enormous. One per cent of GDP – currently $17 billion – is big by any reform or public investment yardstick, in line with game-changing structural reforms such as the general tariff cuts of 1988.

Independent Economics director Chris Murphy reckons that for every $1 of cost to the budget, a company tax cut delivers a gross benefit to Australian consumers of $2.39, a payoff ratio of more than two-to-one. As for any worthwhile spending program, the cost to government translates as a benefit for citizens and, as Murphy observes, it's hard to think of any other use of taxpayer dollars that would produce such a large economic payoff.

Our company tax rate needs to be cut, the sooner the fairer

There is a cost to the budget, and nobody is disputing that. Those opposing it on fiscal grounds should explain why they think it is fairer to spend $8 billion a year on programs or projects that yield a lower or even negative return, or that have not been subjected to any cost-benefit assessment at all.

However, the government's plan is hardly fiscally reckless. It gradually reduces the tax rate from 30 per cent to 25 per cent over a decade and is factored into the 10-year budget projections. The first stage of the plan is explicitly funded through a crackdown on tax cheats and high-end superannuation tax benefits.

If fairness is about ensuring people can access good jobs and growing incomes, while living in a more prosperous country that supports the genuinely disadvantaged, then delaying or failing to implement the full Enterprise Tax Plan is clearly unfair.

The sooner it is implemented the sooner business can respond with increased investment, driving jobs and income growth, as well as increased prosperity that all Australians can share.

Grant King is president of the Business Council of Australia