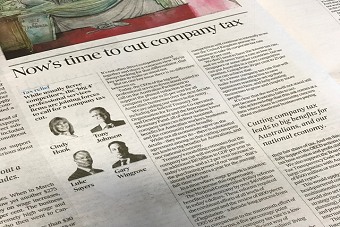 While usually fierce competitors, the 'big 4' professional services firms - all Business Council members - are joining forces to call for a company tax cut.

It’s not often direct competitors stand together and share a common view. We’re always looking for that differentiator, that key point to make us stand out.

But on one key issue there is no difference between us.

Today, the CEOs of the “Big 4” professional services firms stand united to call on the Australian Parliament to support the phased reduction in the company tax rate to 25 per cent for all Australian businesses over the next decade.

We are adding our voices to the many, including the Federal Treasury, the OECD and the IMF all of whom believe lower company taxes can deliver sustained benefits for Australian workers, businesses and the community more broadly.

While not all economists agree on the details - they never do - there is substantial agreement among us that cutting company tax leads to big benefits for Australians, and our national economy.

Treasury’s modelling estimates that the company tax cut will eventually generate an additional $16 billion in GDP per year in today’s terms, and a 1.2 per cent increase in the purchasing power of our wages - that’s almost $1,000 extra a year for the average full-time worker.

In a time where wage growth is anaemic - we need to pursue this opportunity.

The National Competition Policy reforms benefited the economy by over $40 billion in today’s dollars. These reforms required the combined efforts of all levels of government and the review of 1,800 pieces of legislation – a decade long process.

In comparison to the mammoth effort of those reforms, a five percentage point reduction in the company tax rate is a low cost, low effort and efficient way of permanently boosting Australians’ living standards.

This 45th Australian Parliament has the opportunity to make a real difference to Australia’s economic future and send a signal to the world. It can be this Parliament that pulls a major lever to create a more competitive tax system which will boost investment, economic growth and wages.

The reasons for this are clear. Australia is a mid-sized economy that competes for capital. And in a highly digital world, capital is highly mobile.

While the majority of OECD countries have cut their rate over the past 10 years, Australia has stood still. And the competition will continue to intensify as we see the UK pursue its intention to take its corporate tax rate below 20 per cent.

We don’t need to have the lowest tax rate, and we will never have a rate as low as Singapore or some other countries, but we can put Australia in a more competitive position. Going from 30 per cent to 25 per cent can achieve that.

It’s a lower company tax rate that will make Australia attractive to new businesses wanting to set up their operations here, and help existing businesses to grow and employ more people. It’s clear that the world will not stand still just because Australia fails to act.

We acknowledge that this ask comes at a time where there is community concern about multinational businesses paying their fair share of tax. And on this point, we fully support the OECD actions to address Base Erosion and Profit Shifting.

We also support the Board of Taxation’s Tax Transparency Code which calls upon large companies with Australian turnover of $500 million or more to publish a taxes paid report. This would apply to both Australian headquartered companies and foreign multinationals operating here. This report would also set out the company’s tax strategy (including appetite for tax planning), detail how much tax they pay and provide qualitative information on international dealings.

This is not a quid pro quo, it is business listening to the community and helping build confidence.

This Parliament has a real, live opportunity to make an economic difference. Take the politics out of it and do something that will boost Australia’s competitiveness, create more local jobs and contribute to our shared prosperity for years to come.

This opinion article by Tim Reed, chief executive of MYOB and chairman of the Business Council Innovation Task Force, was published by Business Insider on January 18.  When Malcolm Turnbull...

Trump’s tax changes mean we all must knuckle down

This opinion article by Chief Executive Jennifer Westacott was published in The Australian on Wednesday 28 December 2016. When it comes to tumultuous years, 2016 certainly stands out. The essential challenge for...

Here’s A Reality Check: We Have To Pay Our Way

This opinion article by Chief Executive Jennifer Westacott was published in The Australian on Tuesday 20 December 2016. As if our politicians needed another reality check, the message from the mid-year economic and...