This opinion article by Jennifer Westacott appeared in The Weekend Australian on 22 July 2017.

This opinion article by Jennifer Westacott appeared in The Weekend Australian on 22 July 2017. 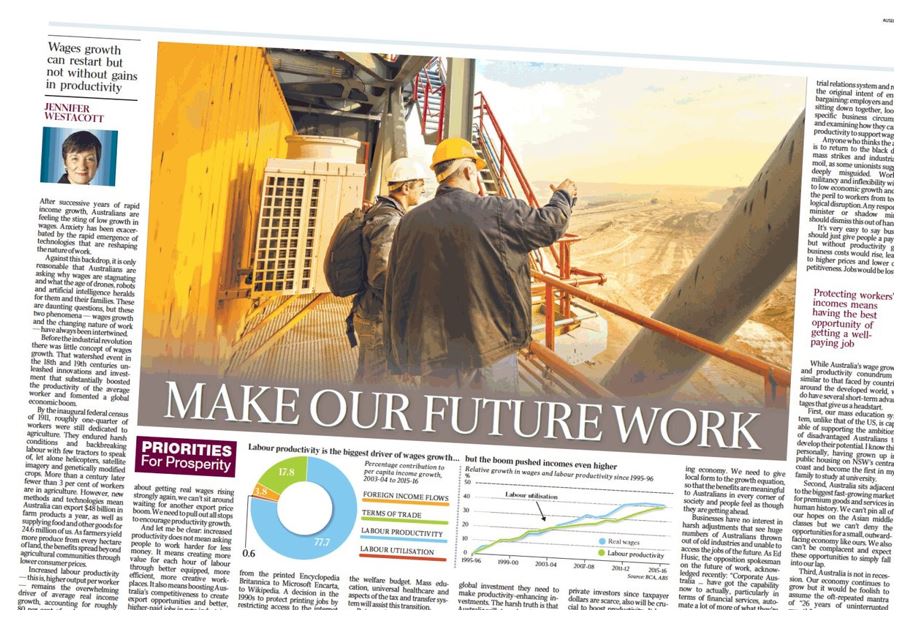 After successive years of rapid income growth, Australians are now feeling the sting of low wages growth. Their anxiety has been further exacerbated by the rapid emergence of new technologies that are fundamentally reshaping the nature of work.

Against this backdrop, it’s only reasonable that Australians are asking why wages are stagnating, and what does the age of drones, robots and artificial intelligence herald for them and their families?

These are daunting questions, but these two phenomena – wages growth and the changing nature of work – have always been intertwined.

Prior to the industrial revolution, there was little concept of wages growth. That watershed event in the 18th and 19thcenturies unleashed innovations and investment that massively boosted the productivity of the average worker and fomented a global economic boom.

This trend continued. By the inaugural federal census of 1911, roughly one-quarter of Australian workers were still dedicated to agriculture. They endured harsh conditions and back-breaking labour with few tractors to speak of, let alone helicopters, satellite imagery and genetically modified crops.

More than a century later, less than three per cent of Australian workers are in agriculture. However, new methods and technologies mean Australia can export $48 billion in farm products a year, as well as supplying food and other goods for 24.6 million Australians. As farmers to yielded more produce from each acre of land, the benefits spread beyond agricultural communities through lower consumer prices.

Increased labour productivity – this is, higher output per worker – remains the overwhelming driver of average real income growth, accounting for roughly 80 per cent of real wage rises in recent decades. Indeed, labour productivity and real wages growth were practically in lock-step for many years leading up to the resources boom of the early 2000s.

That boom was a wildly abnormal sugar-hit to the economy. Companies receiving higher prices for their exports could suddenly offer wage increases that vastly outstripped any productivity gains, while a higher exchange rate reduced the price of imports for everyone else. As a result, over the decade to 2011, the average Australian income rose a phenomenal 30 per cent in real terms.

Click here for an explainer on this chart from our Chief Economist, Lisa Gropp.

The bottom line is this: if we are serious about getting real wages rising strongly again, we can’t just sit around waiting for another export price boom. Rather, we need to pull out all stops to encourage productivity growth.

And let me be clear: increased productivity does not mean asking people to work harder for less money. It means creating more value for each hour of labour through better equipped, more efficient, more creative workplaces. It also means boosting Australia’s competitiveness to create export opportunities and better, higher paid jobs in new industries as well as old ones.

Australia’s next wave of economic change is likely to be as disruptive as many of the industrial upheavals of last century – however, we can avoid the rough edges if business, unions and government can work together to ensure the transition is fair and just.

How should this be done? As the disruption gathers pace, there are calls to increase regulation and even introduce an automation tax – futile gestures that would only further erode Australia’s competitiveness. This means limiting consumers’ choices and forcing them to subsidise outmoded goods and services. However, trying to isolate Australians from new technologies will only transform our country into a global backwater and ultimately impose much worse social upheaval.

In just two decades, we’ve gone from the printed-and-bound Encyclopaedia Britannica, to Microsoft Encarta, to Wikipedia. A decision in the 1990s to protect printing jobs by restricting access to the internet would have been disastrous.

A more enlightened view is this: don’t focus on protecting the jobs – enhance the skills and capabilities of our workers, and build the competitiveness of our industries.

Our education and training system should be improved so young people are trained in the kinds of roles that machines can’t do as well – lateral thinking, creativity and emotional skills. Simultaneously, workers whose jobs are eroded by the winds of change will need the ability to duck in and out of training as required without leaving the labour force.

This should be supplemented by a robust and targeted welfare safety net that ensures displaced workers don’t fall into poverty while finding their feet. This could include increasing the inadequate Newstart allowance, arguably the most tightly controlled corner of the welfare budget. Mass education, universal healthcare and aspects of the tax and transfer system will assist this transition.

But most importantly, protecting workers incomes means having the best possible opportunity of getting a well-paying job. This means implementing policies that will drive investment in new, more productive jobs and ensuring the efforts of Australian businesses to grow, expand and export aren’t hampered by high taxes and onerous, ineffective regulation.

High personal taxes diminish reward for Australians who expend more time, energy and resources to boost their personal productivity. When both Labor and the Coalition support marginal tax rates around 50 per cent, don’t be surprised to see upwardly mobile young Australians moving to thriving commercial centres like Hong Kong and Singapore, where personal tax rates are closer to 20 per cent.

Similarly, high business taxes undermine the ability of companies to attract the global investment they need to make productivity-enhancing investments. The harsh truth is that Australia will struggle to become a hub of advanced industry with an uncompetitive 30 per cent company tax rate, given the average across Asia is 21 per cent.

Multinational companies bring to Australia new high-tech skills and equipment that boost our workers’ productivity and drive up wages growth. Blithely assuming that every multinational searching for an Asia-Pacific headquarters will automatically pick Australia reflects a complacent and imperious view of our Asian neighbours.

Australia also needs to tackle ineffective and costly regulation, and ensure the rules of doing business are fit for purpose. For instance, Australia can do better than to have approval processes for major projects that take years to complete, cost millions of dollars and satisfy neither proponents nor the community.

New infrastructure will also be crucial to boost productivity, most of which will need to be financed by private investors since taxpayer dollars are scarce. It beggars belief that, when Infrastructure Australia has identified 100 projects and initiatives as national priorities, there are calls for government to borrow billions to finance new electricity assets that the private sector would leap at given the right energy policy.

The twin issues of wages growth and the changing nature of work must become the key consideration of every piece of social and economic policy that parliament considers. However, this transition in the economy can’t be left to government to manage through regulation and spending programs. Business, government and unions must work cooperatively together to decide what each of them can do to support the conditions for productivity and higher incomes.

Speaking for business, we must own the productivity problem and continue taking a leading role in preparing our own employees for the challenges of an ever-changing economy. We need to give local form to the growth equation, so that the benefits are meaningful to Australians in every corner of society and people feel as though they are getting ahead.

Businesses have no interest in harsh adjustments that see huge numbers of Australians thrown out of old industries and unable to access the jobs of the future. As Ed Husic, the opposition’s spokesman on the future of work, acknowledged recently: “Corporate Australia … have got the capability now to actually, particularly in terms of financial services, automate a lot of more of what they’re doing but they are conscious about the job impact.”

These are not decisions that business takes lightly. Australian companies weigh all of their options carefully before hiring workers overseas, and are increasingly looking to employ people in regional centres where unemployment rates are higher and costs may be lower.

However, companies cannot ignore the seismic shifts in the global economy forever. Firms that allow their business models to crumble, without devising a credible alternative, have only themselves to blame. Less adaptive media organisations are learning this lesson the hard way.

Our traditional industries, such as mining and agriculture, will not cease to exist. To the contrary, they should go from strength to strength as they continue to find new, technology-enabled ways to compete in tandem with new companies in burgeoning sectors such as services.

We need to renew the industrial relations system and return to the original intent of enterprise bargaining – employers and unions, sitting down together, looking at their specific business circumstances and examining how they can boost productivity to support wage rises.

Anyone who thinks the answer is to return to the black days of mass strikes and industrial turmoil, as some unionists suggest, is deeply misguided. Workplace militancy and inflexibility will lead to low economic growth and only increase the peril to workers from technological disruption. Any responsible minister or shadow minister should dismiss this out of hand.

It’s very easy to say that business should just give people a pay rise, but without productivity gains, business costs would increase leading to higher prices and lower competitiveness. Jobs would be lost.

While Australia’s wage growth and productivity conundrum is similar to that faced by countries around the developed world, we do have several short-term advantages that give us a head start.

Firstly our mass education system, unlike that of the United States, is capable of supporting the ambitions of disadvantaged Australians to develop their potential. I know this personally, having grown up in public housing on NSW’s Central Coast, and become the first in my family to study at university.

Second, Australia sits adjacent to the biggest fast-growing market for premium goods and services in human history. We can’t pin all of our hopes on the surging Asian middle classes, but we can’t deny the opportunities for a small, outward-facing economy like ours. We also can’t be complacent and expect these opportunities to simply fall into our lap.

Third, Australia is not in recession. Our economy continues to grow, but it would be foolish to assume the oft-repeated mantra of “26 years uninterrupted growth” means this streak will continue indefinitely, or that we don’t have to work hard to lock in growth. This achievement, built on successive waves of reform under Labor and Coalition governments, will end sooner rather than later unless we continue to transform and adapt.

We are also not threatened with conflict, as is northern Asia, forced into austerity like parts of Europe, or trying to extract ourselves from a major trade bloc like Britain. If Australia faces into the wind and rejects facile answers, we can make the difficult but necessary adjustments to boost wages and create meaningful work for all Australians.

The alternative is to wait around for another once-in-a-lifetime terms of trade boom – and that could be a very, very long wait.

Jennifer Westacott is chief executive of the Business Council of Australia